Rode into Recruits convention March 24, 25, 2011 on a Friday evening and got to play in the DBA Chariot Wars Tournament. I tied for 2nd place in a great four game round robin tourney. The army I was using is owned by Steve Gross and was painted by him. 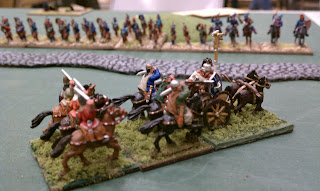 Lch General and his Cv bodyguard charge impetuously into the only defeat I had that night!! I let my general stand get shot three times in the back but I had pushed and defeated two stands of enemy - light horse and knights. Would have been decisive because I had turned the flank until the bowmen finally scored a hit on my general!! 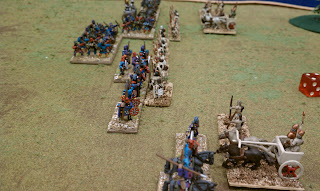 The Trojans on the right are beating the Asian bow army on the left. This battle gave the lead to the Trojans. 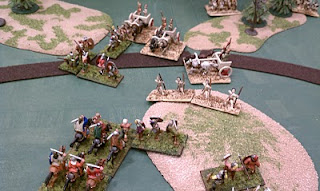 Here we see an overhead view of my Gallic army defeating the Trojans. 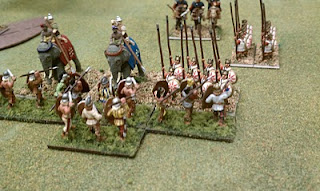 This victory came down to a die roll that went my way. Those hephalumps should have sealed my fate.

The big Clockwork Century American Civil War game set in the blakanized US was my entry into the convention program. I used my 5mm ACW and Steampunk collection to portray the 1880 battle of Nouvelle Orleans. This envisions an ongoing North American War that pitted the Republic of Texas and the Confederate Nation against the New France, Union and German allied contingent. The game featured landship Ironclads, Aeronefs, and steam tanks of every description. 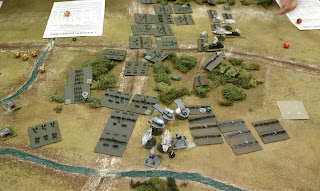 This aerial view is courtesy of the Fleur di Lis airship. Well below we can see a knot of aeronefs engaged in a swift gun duel fight high above German walker steamtanks. The infantry trudge nearby as the mechanized monsters beat at each other... 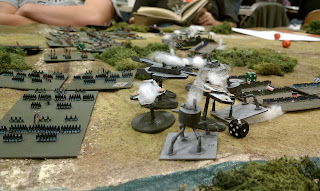 Circling behind this fight we have descended for a better view of the German Mechanics. 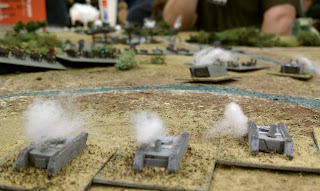 Here we have an image of the Texan "Wall of Steel" as it plows earth and opposition in it's move toward the Union lines. 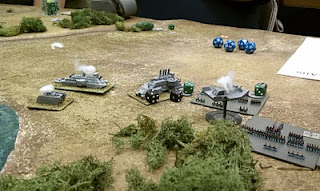 A pinnacle point in the battle was the slugfest that occurred between the "Star of the West" landship and the "City of Texas" landship. The 9th Illinois Blackhawks infantry regiment assailed the Texas in a boarding action and eliminated all crew and guns in a desperately hard fought battle. The Aeronef descended and retrieved the commander of the Texas and his immediate body guard before the infantry could lay hands on him. 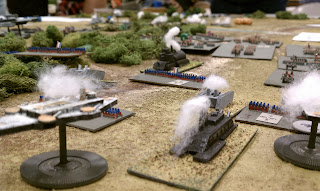 Here we witness the Steamship Betty plowing through French infantry formations the aeronef bombards and the landship Flambeau fires its weapons but the large black Betty plows on unmercifully.

This was a fun game with a lot of cheering the die rolls and cursing the unlucky turn of the die.

I had a chance to command an army of gnomes in a Splintered Light game demo. David McBride was giving introductory Mighty Armies demonstrations and had a variety of armies to test out. I chose gnomes as my forces and clobbered the behebus out of the goblins! 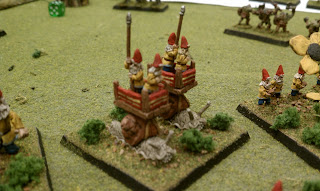 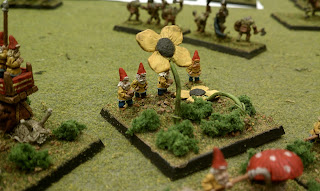 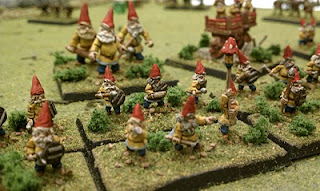 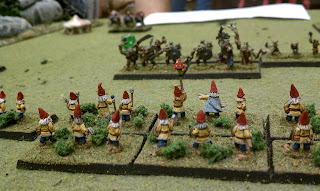 Way cool minis and a great demonstration game. Thanks to David and Splintered Light Minis. 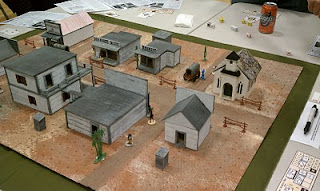 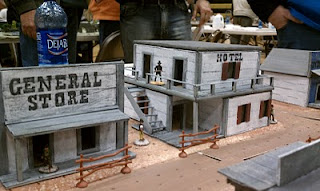 This western town just blew into existence like a tumble weed from the creative hands of one Secondhand Lion - Ted Conn. 10 player gunfight scenario that had a keen interest and played well through mid day. 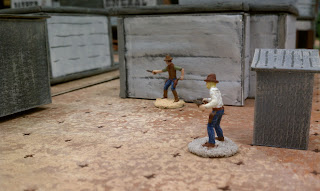 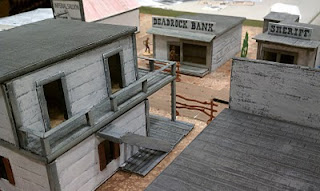 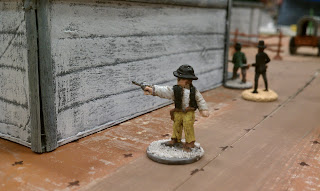 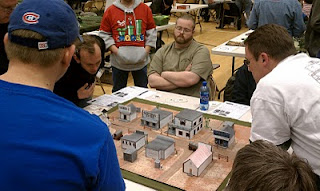 Omnipotent god save me from a sucking chest wound!
We here at the Penny Whistle anticipate a full after action report soon on the scenario and story of the shoot out in Deadrock.

High above the action in the sky over Lee's Summit. 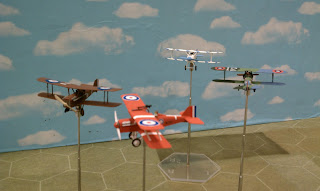 What a great convention this last weekend (March 25-26, 2011) I got to play in a number of games, spend money on a bundle of new toys and visit with old friends and new. Here are some images from Aaron Lococo's Aerodrome game. I had 1 victory over what I was told was a very skilled pilot! I am the blue and white pfalz in the background flying toward my kill in the red SE5a. This game was later Saturday evening and was very fun. 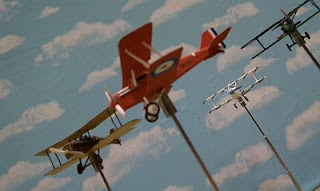 The ground troops view of the circus. 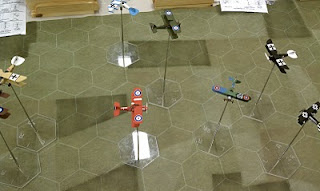 View from the CAP. 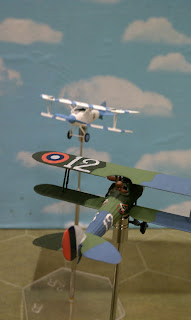 In the Clockwork Century war continued at a mechanical pace in North America. Nations from around the globe found cause and means to enter into the civil war that raged across the continent. In New France a defensive stand by the colonial regulars repulsed the Confederate - Texan attack. Renewed hostilities included an influx of Prussian and Northern German Confederation attacks with clockwork walker tanks and Aeronefs. Again the French and pro Unionist forces prevailed. We take you now to images obtained through the steam pixelation device on board the Fleur d lis. 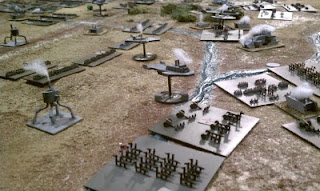 From the battle of Nouvelle Orleans, here we see Prussina clockwerk tanks approaching a Union column of cavalry supported by field artillery. 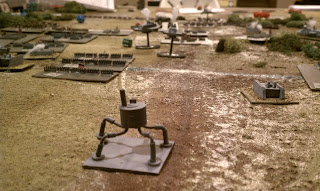 View from behind the walker looking west toward Union lines. 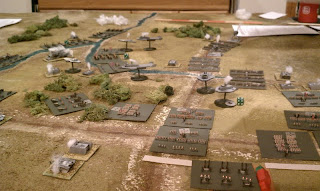 Aerial view of the conflict. Clicking images will make them easier to see. 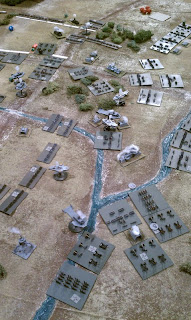 A final view of the battlefield. After action report would include a heavy butchers bill for the Confederates. The lost landship Ironclads could not be definitely secured and the night was spent by roving bands of belligerents trying to pry technology from the fires of battle.

The Secondhand Lions wargmers played a Victorian Science Fiction game last Thursday featuring my complete scratchbuilt 5mm ACW armies with the addition of my newly built steam tanks and Ironclad Landships.
All forces on the table represented armies from an alternate past that has the American civil war lasting well into the 1880's. Inspiration for this game world came from two sources that I want to develop into our club's backstory for further games in this genre. Internet googling for alternate U.S. history timelines produced two quick results of immediate interest.
I point you to the following linkage:
http://users.rcn.com/mwhite28/misc/balkanus.htm
This point of departure has the separatists winning each conflict that occurred in the U.S. development. I like this map a lot and will probably make a Victorian "aged" adventure map from this information.
The second backstory thread comes from the literature works of Cherie Priest:
http://theclockworkcentury.com/?page_id=2
The Clockwork Century is an alternate history filled with the full stock of mechanical, biological, and fictitious toy box trade items that wargamers love to model and game with in this genre.

Aerial photography of the battle was obtained by the airship Fleur-di-lis, and includes descriptive high points of the action. Sailing from the aerodrome in La Nouvelle-Orléans our tour of the battlefield will be seen from behind the French lines and looking north to the oncoming Confederate and Texan combined force. The French forces of Louisiana posted a defensive line across the main road into La Nouvelle-Orleans. French allies included the United States Federal force from Missouri. They were expected to arrive from the western flank and hit the attack column approaching the front lines.

Image is oriented as standard compass points. We are looking North. Federal forces with one landship and a handful of steam tanks approaches from the west. Texan TLS "Alamo" is seen upper right.

Contact and desparate fighting in the wooded area Confed/Texan vs. Union. At the bottom of the image we see the Confederate Landship plow through the French lines. The French landship pummels it with high explosives.

An after action pixel of the CLS Black Betty as she rests in her demise, steam pouring out of large holes shot through from the French Ironclad, "Flambeau". As the "Fleur-di-lis" landed to take these pictures it was reckoned that the French/Union forces had held the cross roads and main line of approach was secure for the evening. Renewed action is fully expected along these coordinates and the Aeronefs have been put on alert. In our next action we fully expect to see the land Terrines reinforced by Aeronauts.
Posted by Gr33nw00d11 at 8:15 AM 2 comments: