The Secondhand Lions faithful brotherhood of war game enthusiast convened at the casa de Conn for a play-test of Axles and Alloys.  Ted has scaled up a 1/64 Hot-wheels version of Thunder Road and we also want to use the kit-bashed cars for other mayhem and destruction games so our club has decided to try out the free available rules called Axles and Alloys. 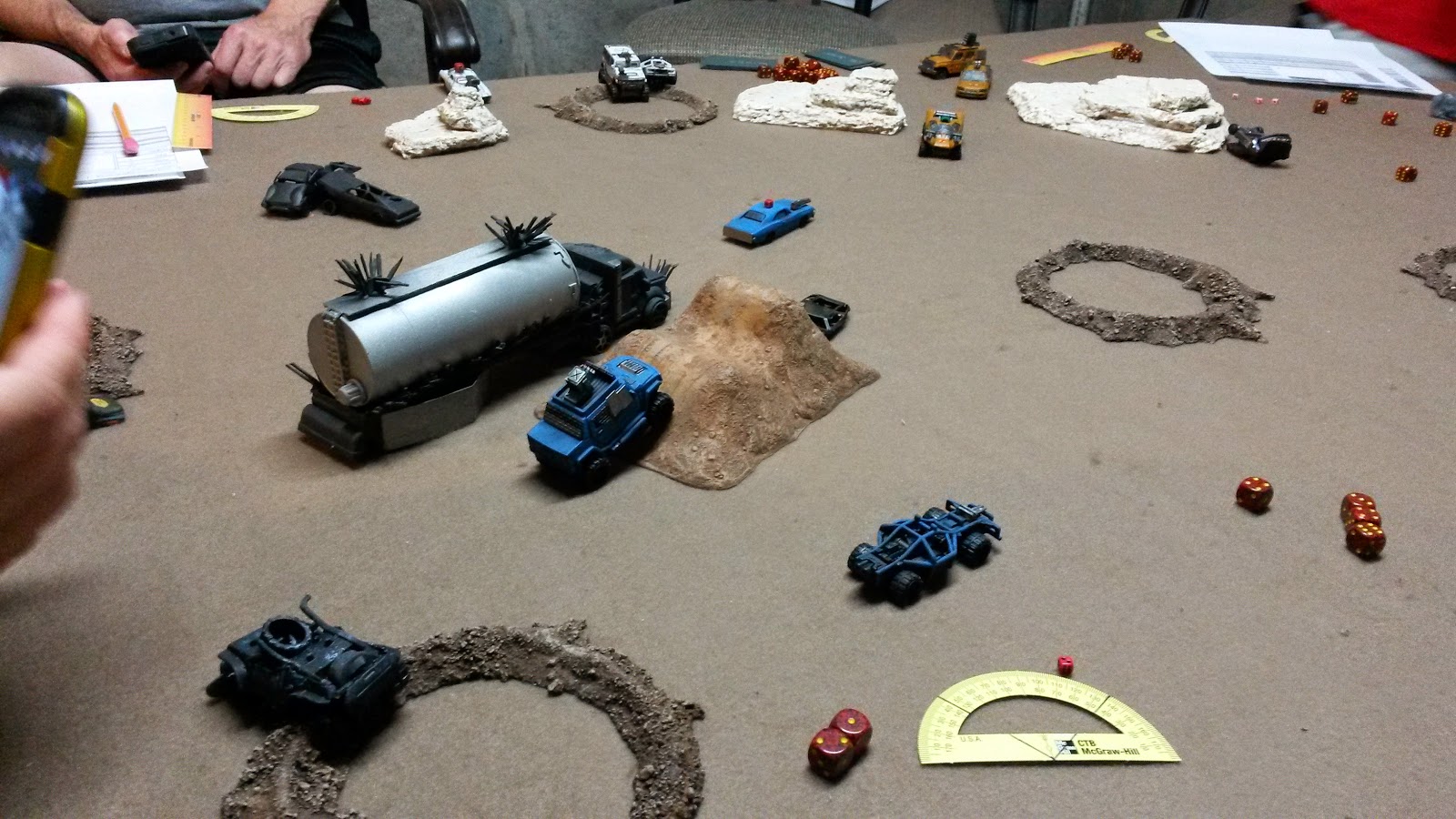 Let's look in on the rumble and thunder of our first game.  Here we see the good guys in blue trying desperately to secure fuel for the citizens of Summitville.  "Motherload" is the name of our fine community's fuel transport and our escort team of Angels can be seen shepherding the truck around dead man's curve just outside of town.  My task was to get across the table with the fuel. 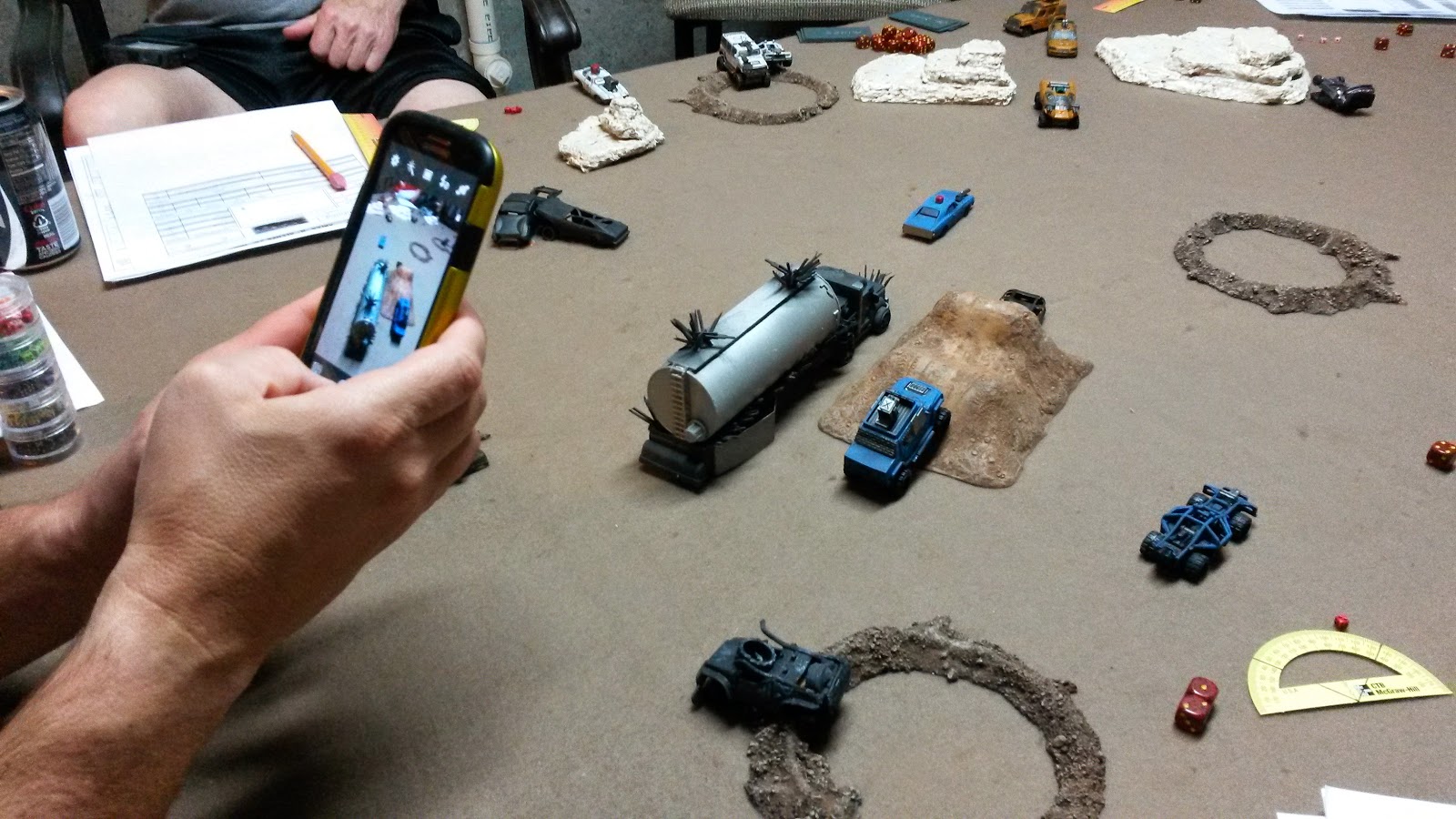 Rival news agencies were in the air covering the fate of the "Motherload." 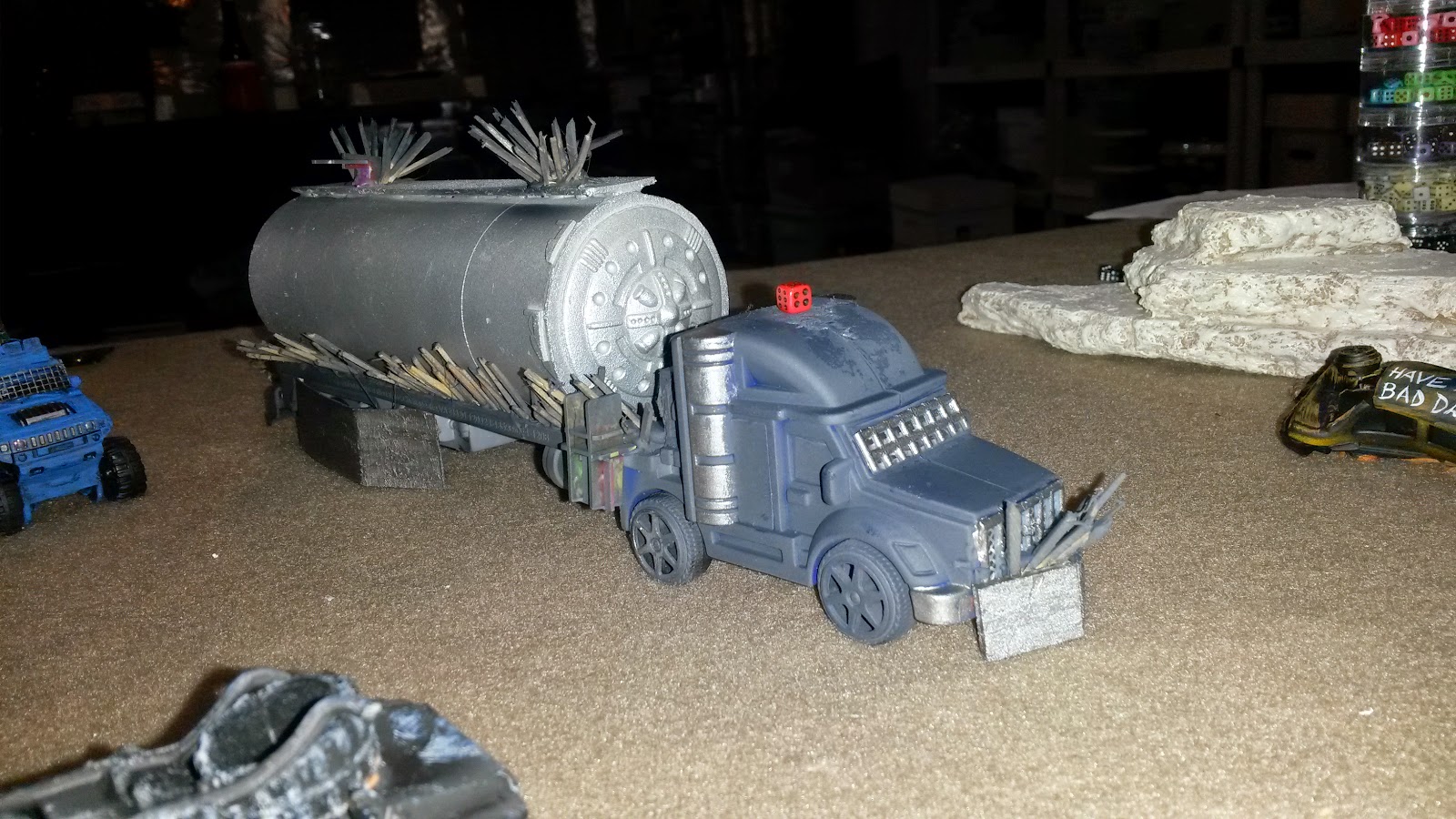 EEEEEEEERRRRNNNNN EEEEEEEEEEERRRRRRRRNNNNN!!!!!
Yeah, I got to yell that air horn sound effect each time I moved the big beast. 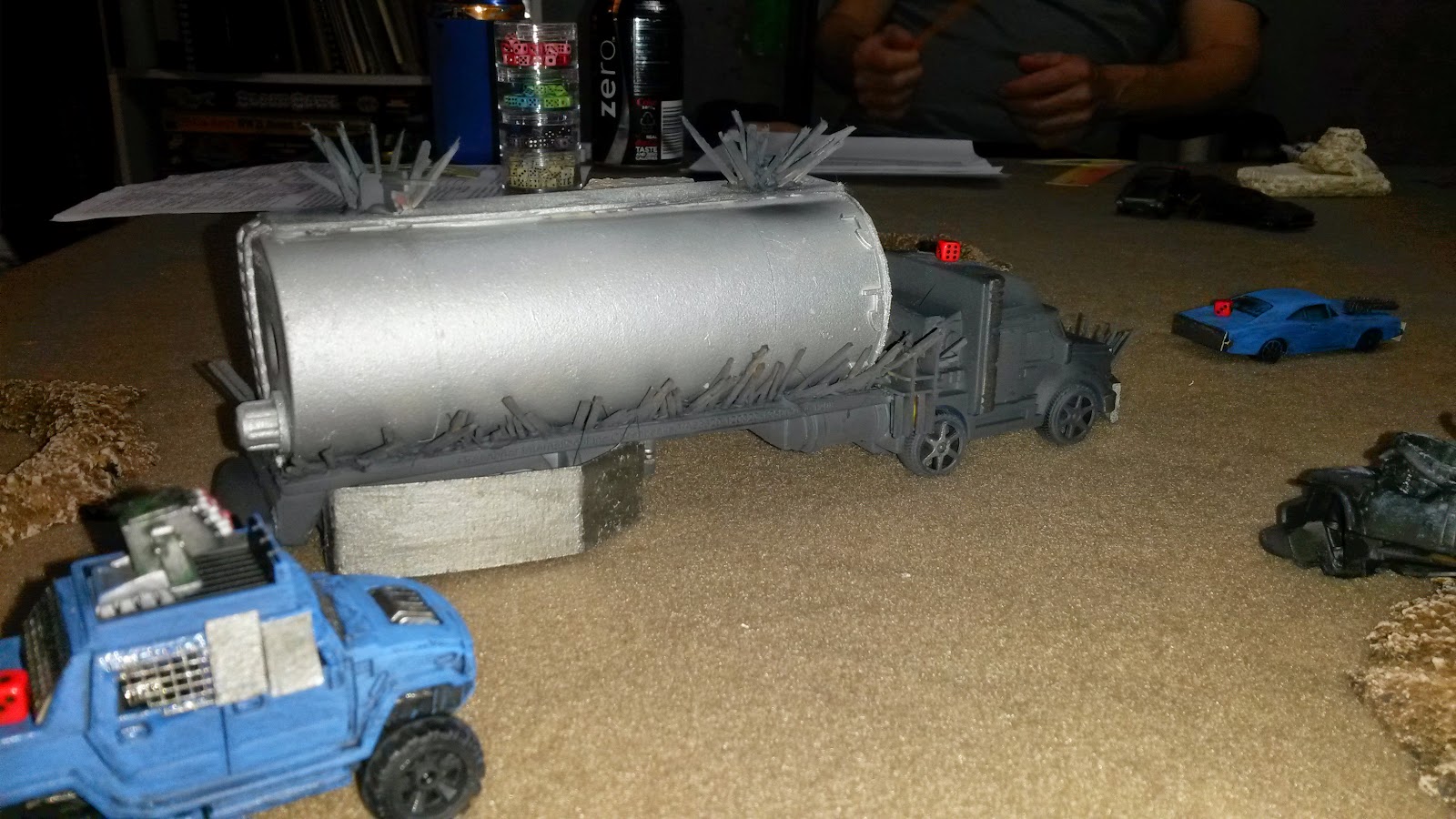 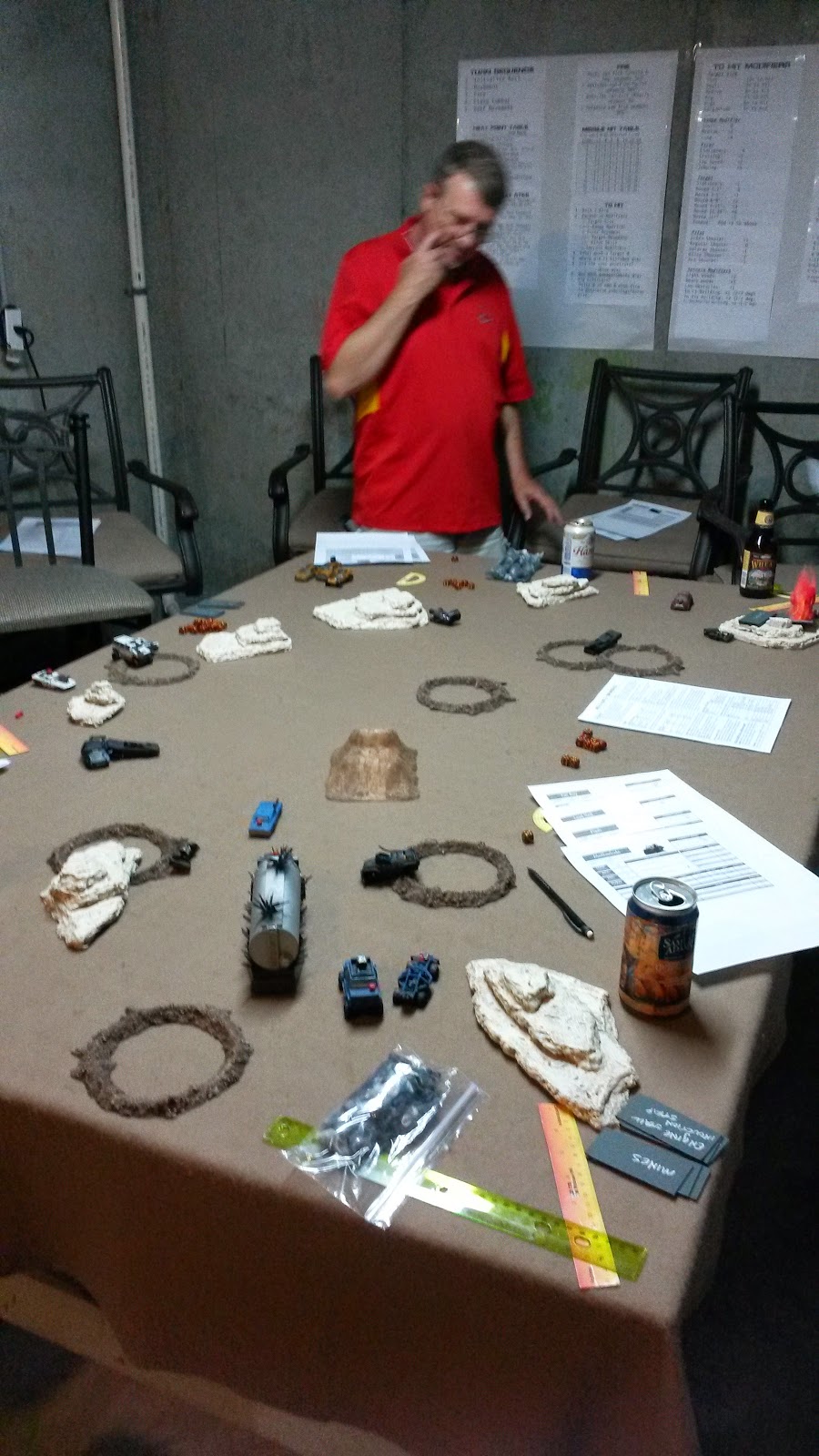 Three teams of bandit outlaw car gangs came against the Motherload and we lost the truck just a mile outside of town to a huge fireball of flame. 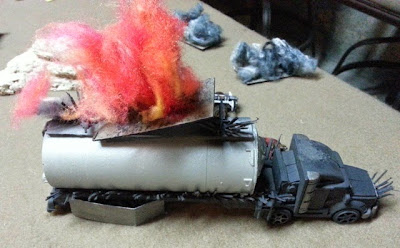 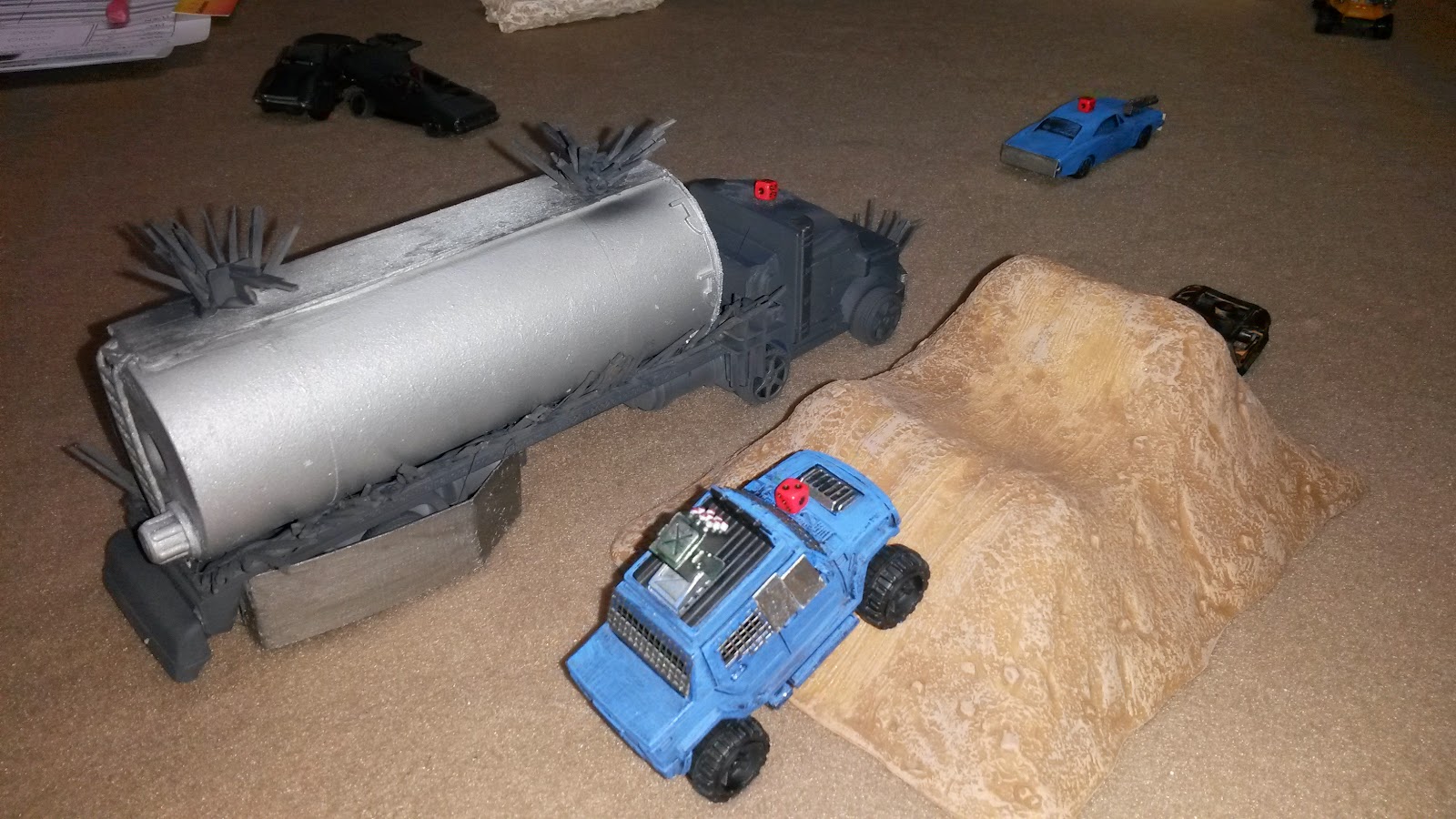 Here we can see the famed Tall Boy hummer getting ready to catch some serious air.  Tall Boy crewed by Ken VP currently holds the club record for "time aloft" at 10.5. 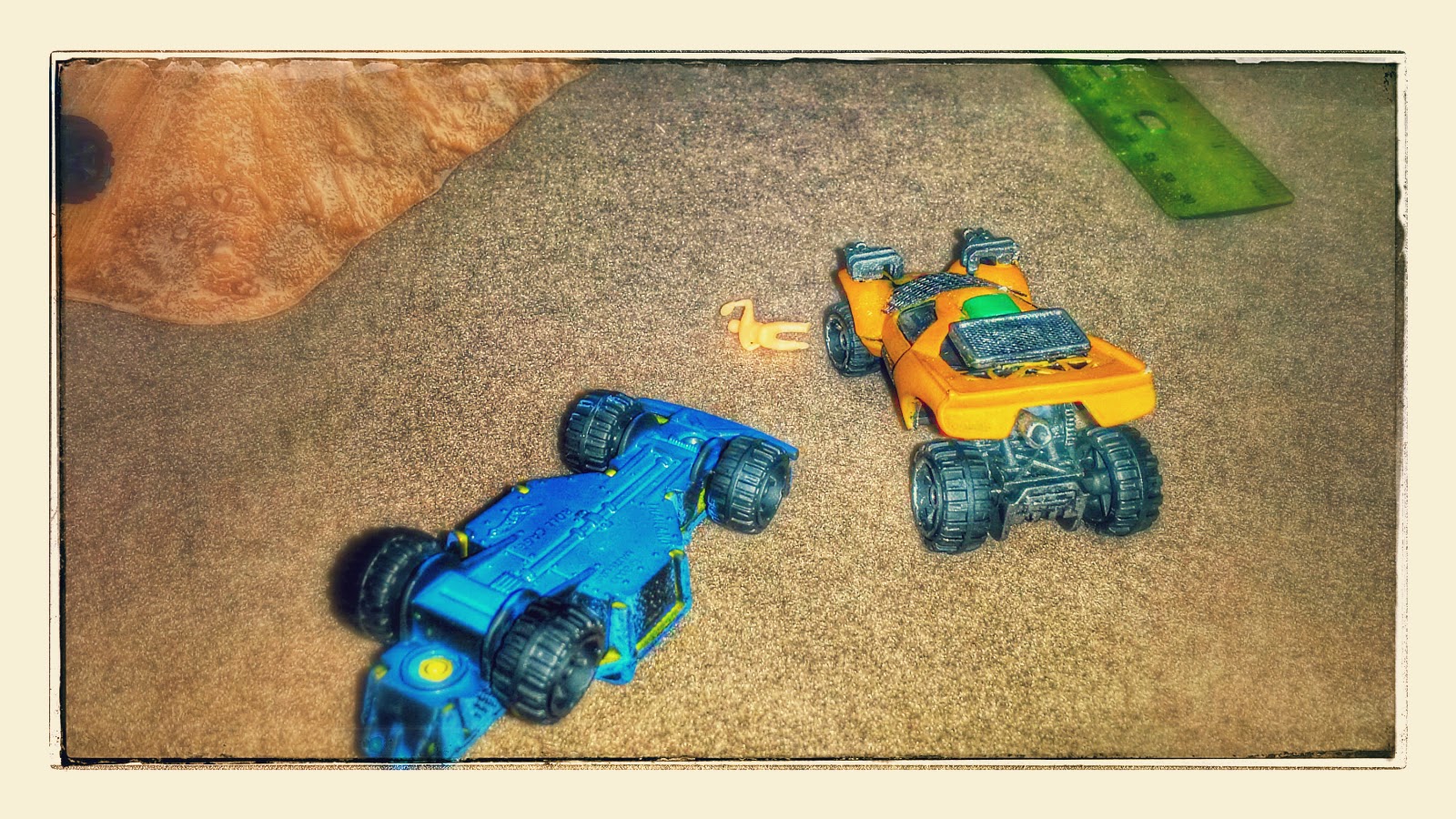 One of Jon H's buggys head butted my buggy and killed my driver outright.  He got thrown from the roll cage and was just a sack of bones when he hit the desert gravel.

Wow!  Can we play again.  I have a feeling that we might see some individual cars get created from this game set of rules.  It was a great night of friends, beer, and laughs.

The Thursday night regulars had a HotT throwdown this week with two battlefields featured.  On table 1 was the Crusades armies with some fantasy elements added.  The Saracen army fielded a flying carpet and a djinn magician.  The Crusader army was pretty historical but had some added heroic elements like a paladin and some relic bearing heroes. 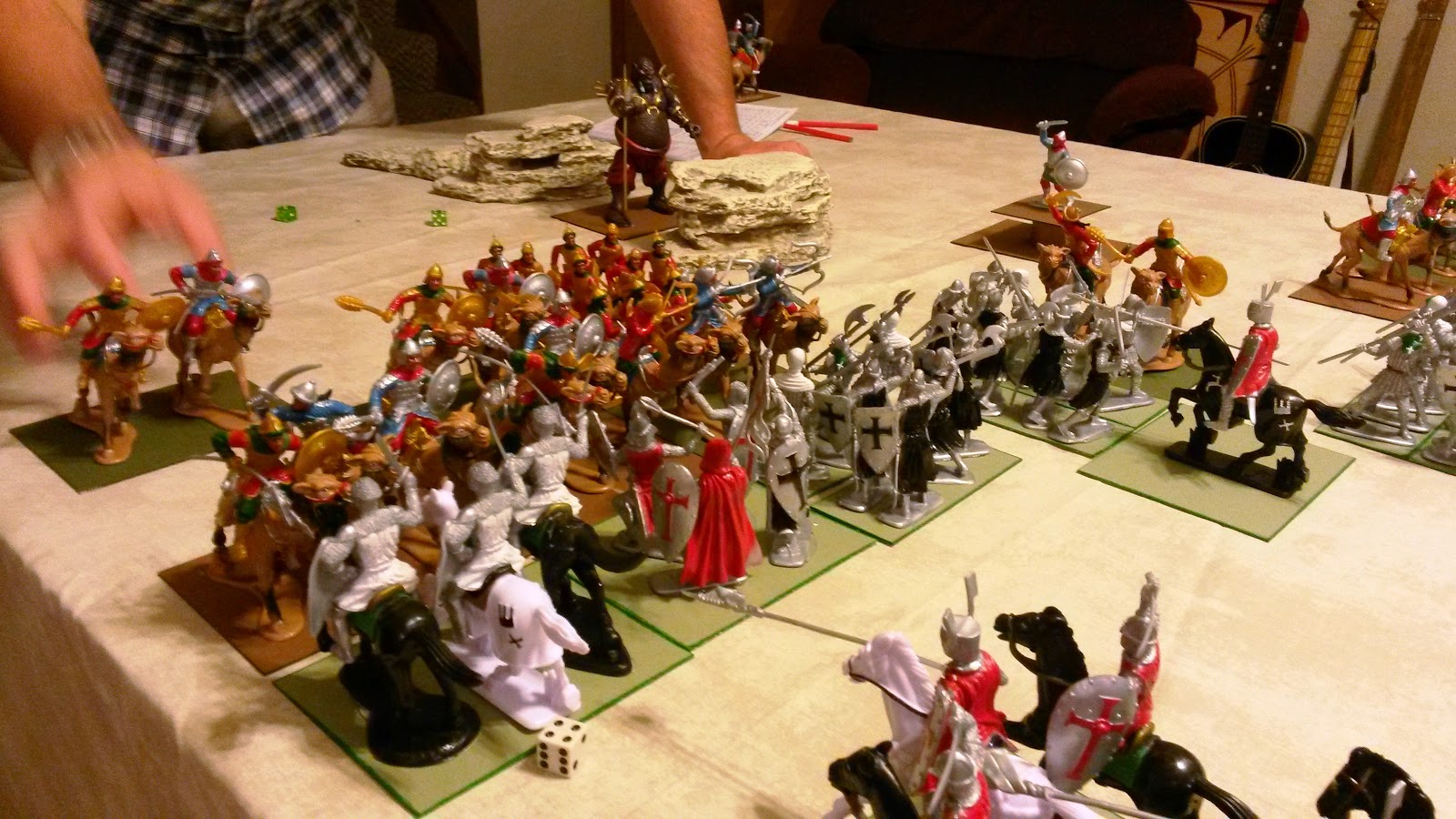 On table number 2 was a Roman vs. Gaul scrum reminiscent of the opening scenes from Gladiator the movie.  I think they played pretty historical elements but with 40 point armies.  In fact all armies this evening were expanded to 40 points of Hordes elements. 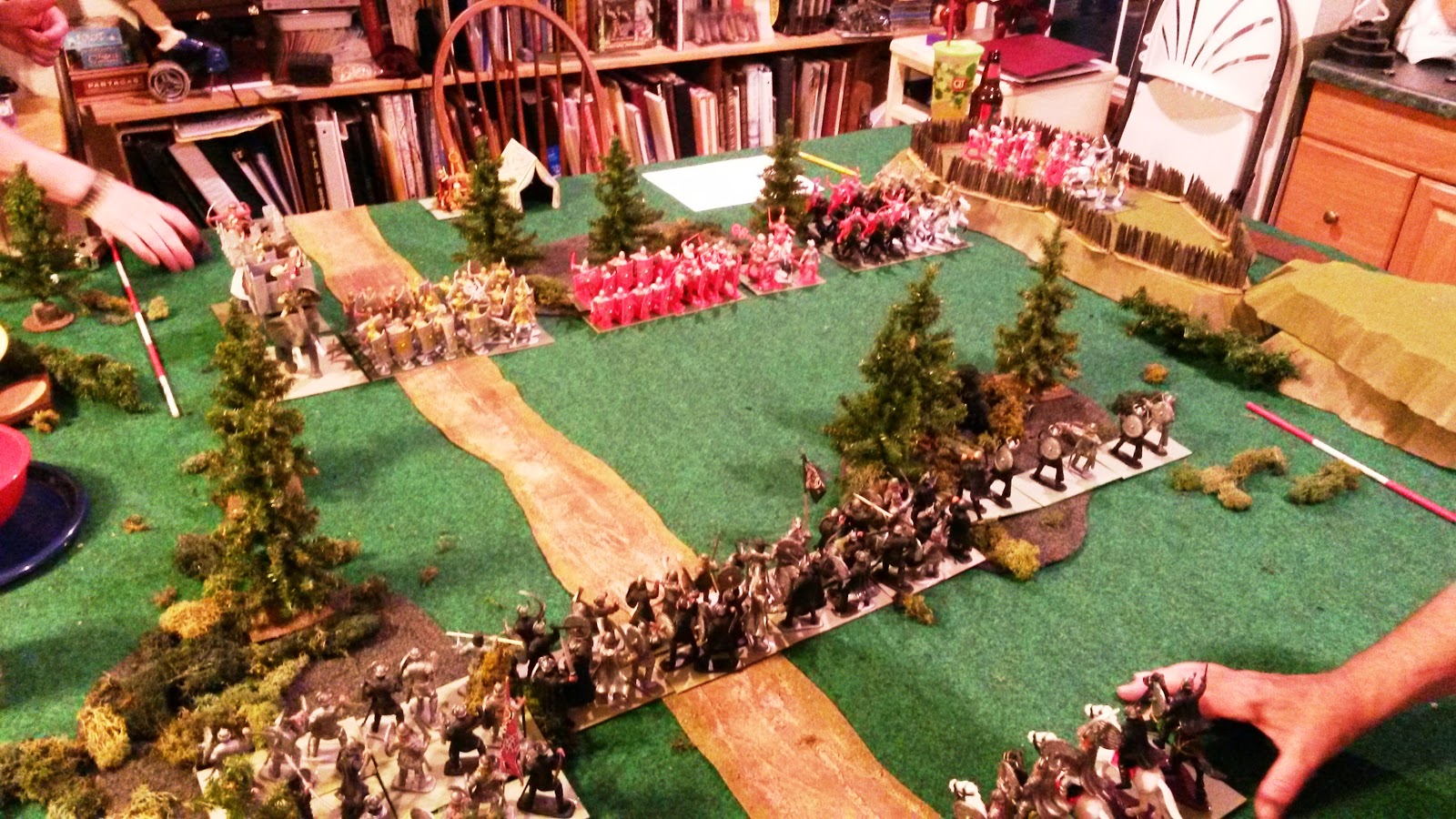 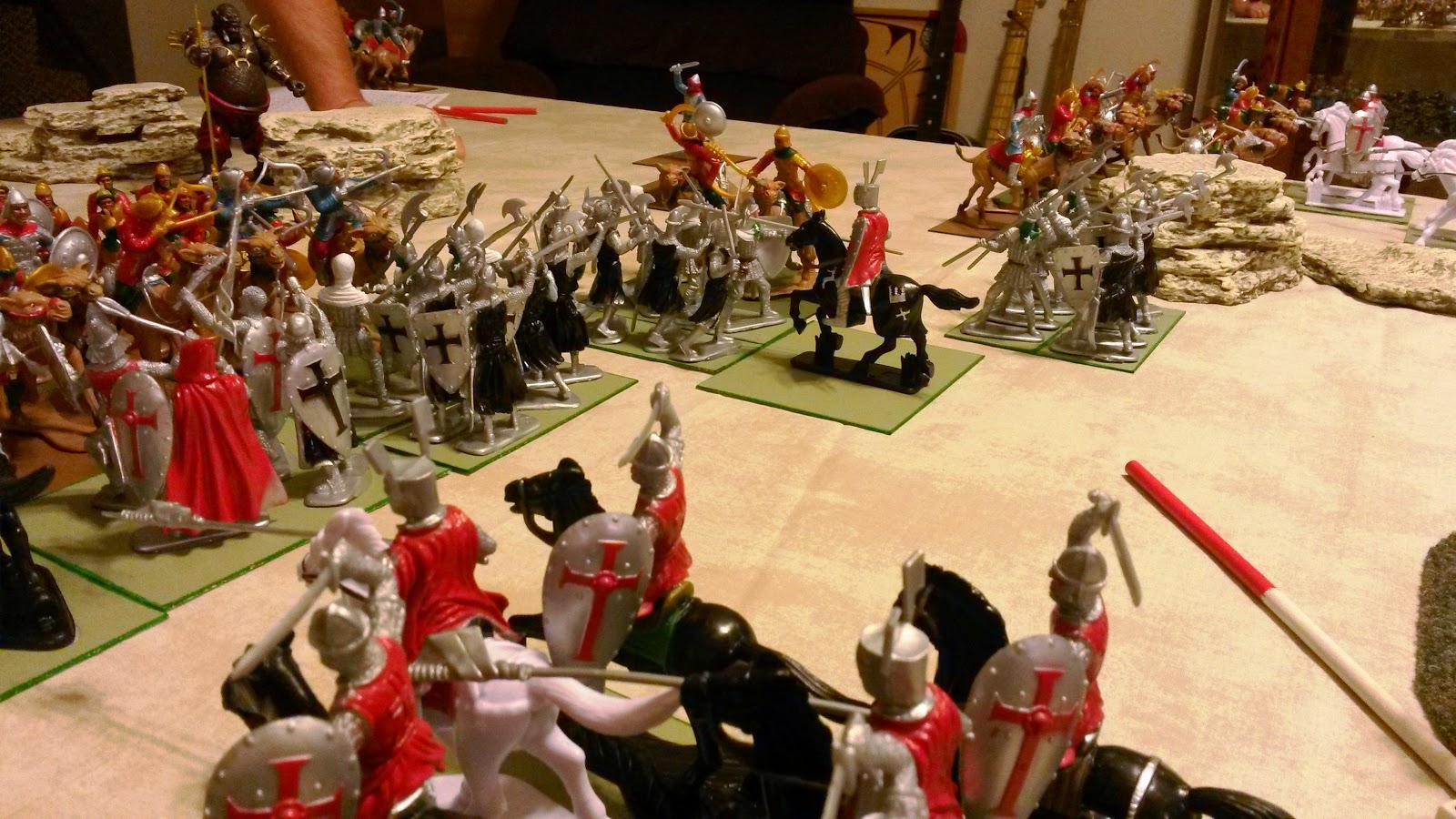 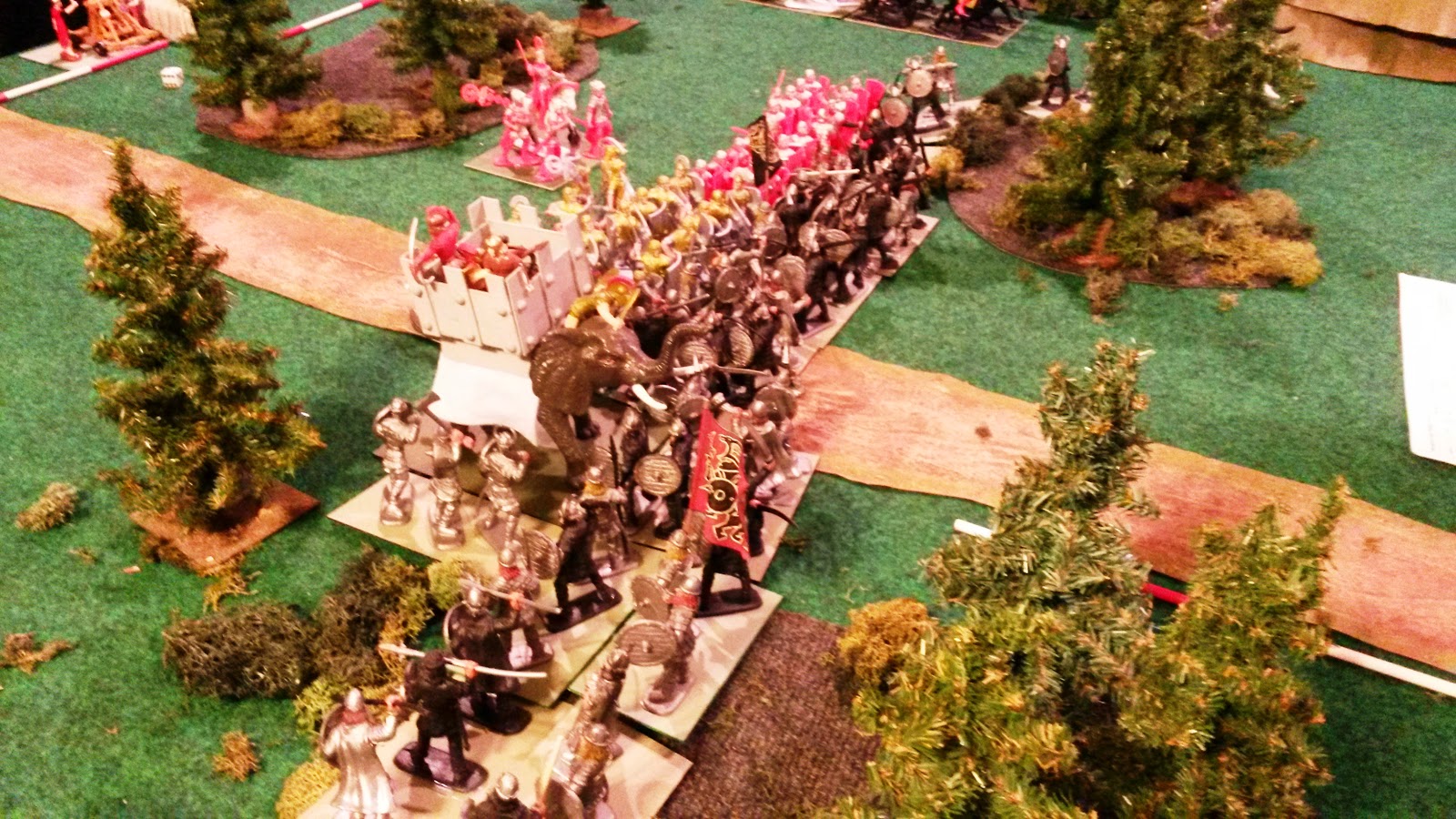 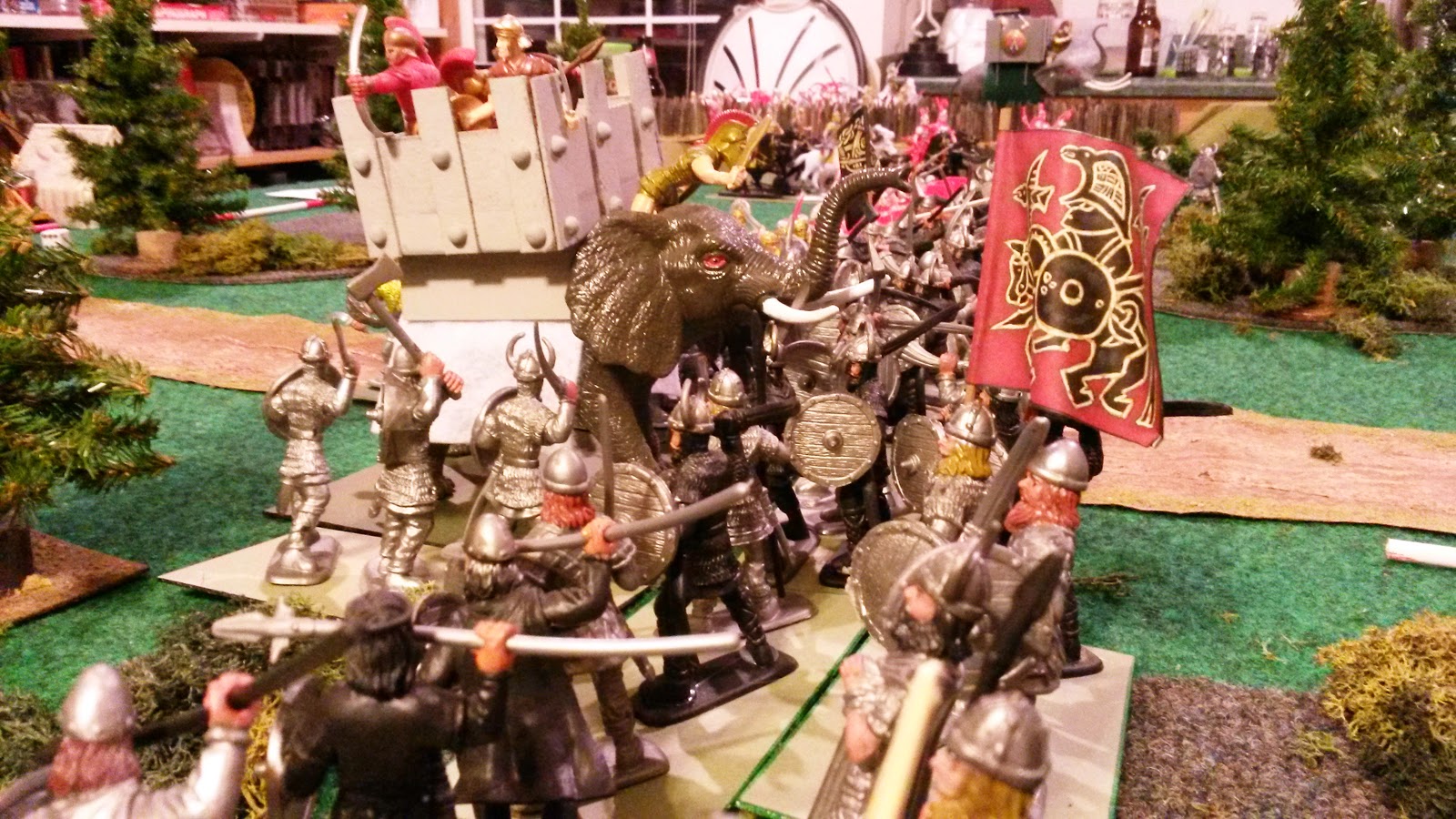 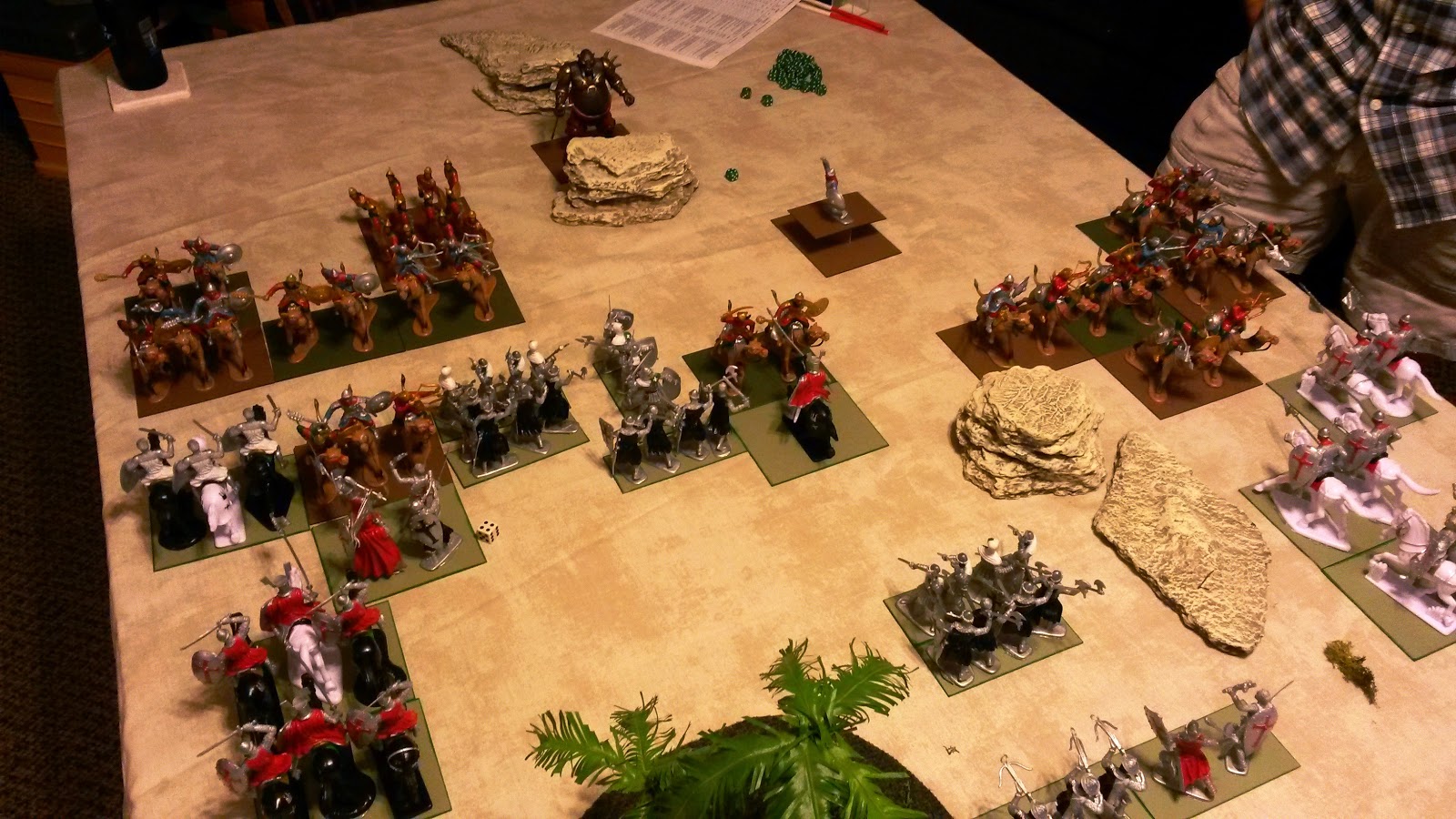 I really like the look and feel of these Supreme Plastics figures.  They are prepainted rubber 60mm and make for fun to build and great to play armies.  Best part of the hobby is the game, beer, and good friends.
Posted by Gr33nw00d11 at 10:29 AM 6 comments:

Ted Conn's Annual game day in-house "convention" was held the weekend of August 16.
Conn-Con
A full day of gaming that features the local lads gathering and either showing to play or bringing along a game that will get played at some point along the day.  The event usually runs into late in the evening.
I was first out of the gate.

My Vietnam game is a crowd pleaser and has a good level of play-ability at convention like settings.  It was a special request at Conn-Con and I gladly obliged. 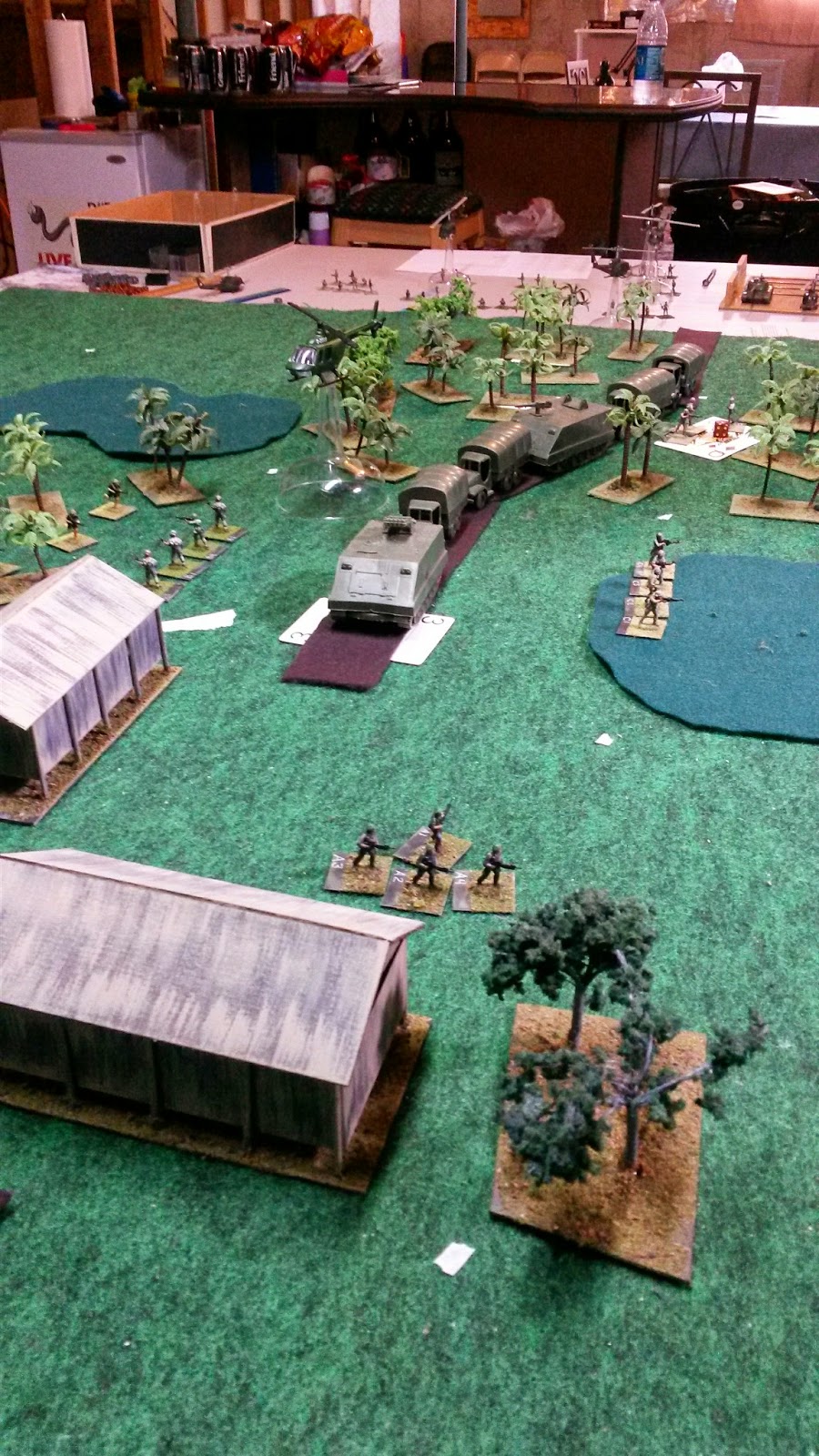 So the Vietnam game is a setting where all the players are on one side - USA.  The "game" is a random card drawn setting that produces the encounters that were typical of a Vietnam operational experience for US forces.  The above image shows the battalion entering the valley in helicopters and a vehicle convoy.
Our battalion commander, Jeremy Morrissey also commanded A Company and the Green Beret LRRP team. 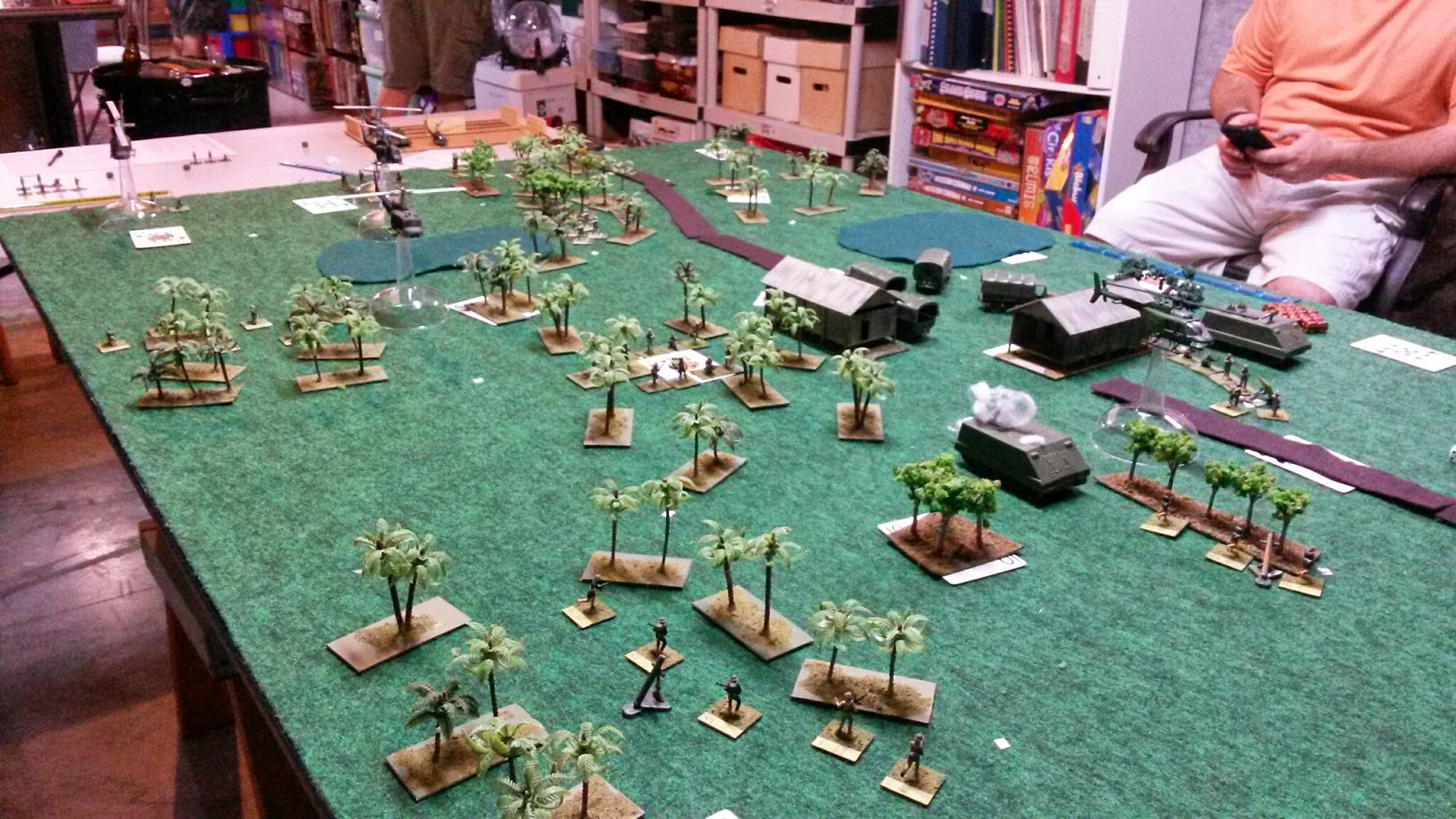 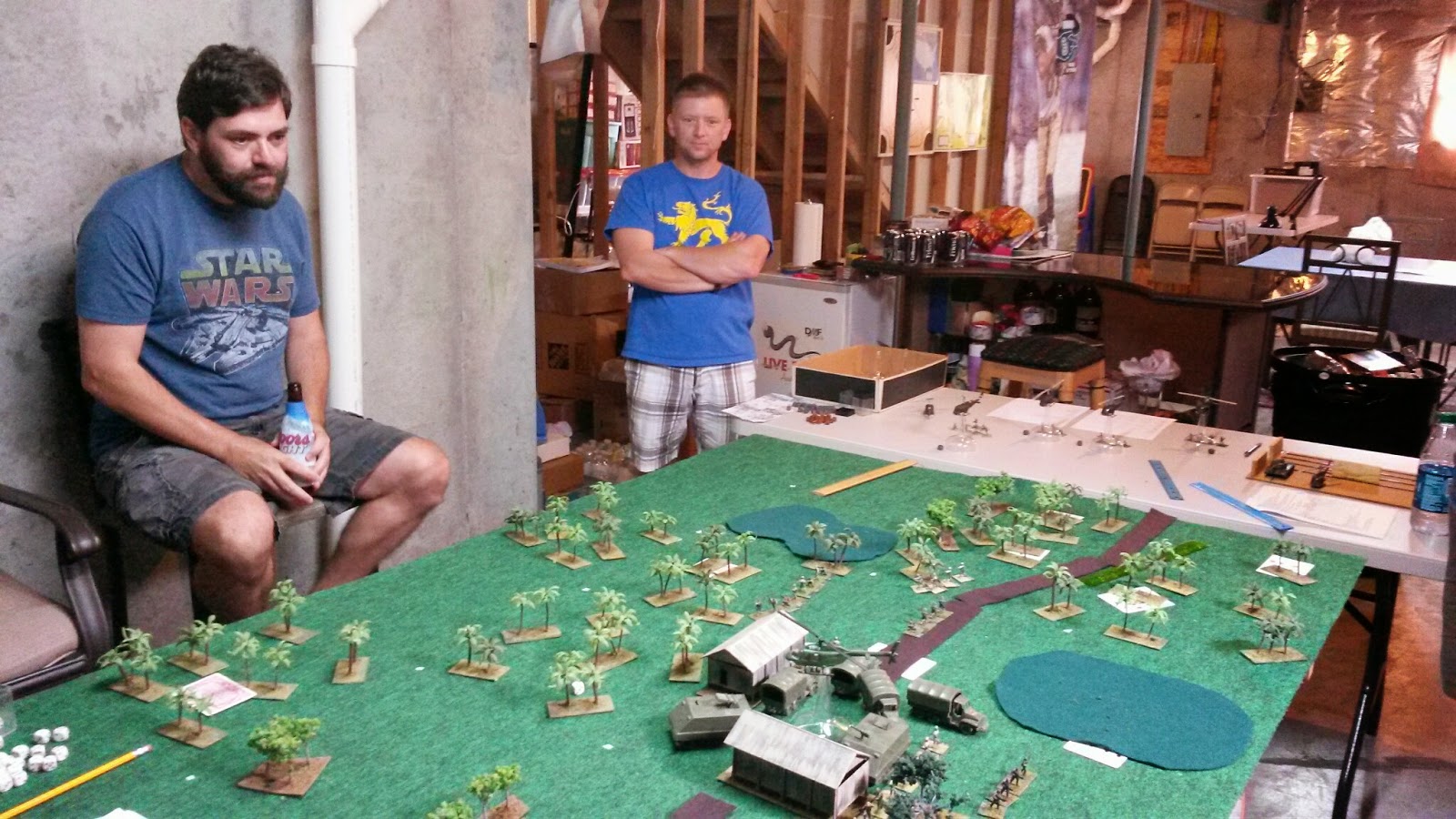 Chuck Couch was our Company B commander.
Ted Conn, the convivial convener of Conn-Con commanded Company C. (That might be my favorite sentence I have ever written for this blog.) Pat Chambers was our base security commander with D Company. 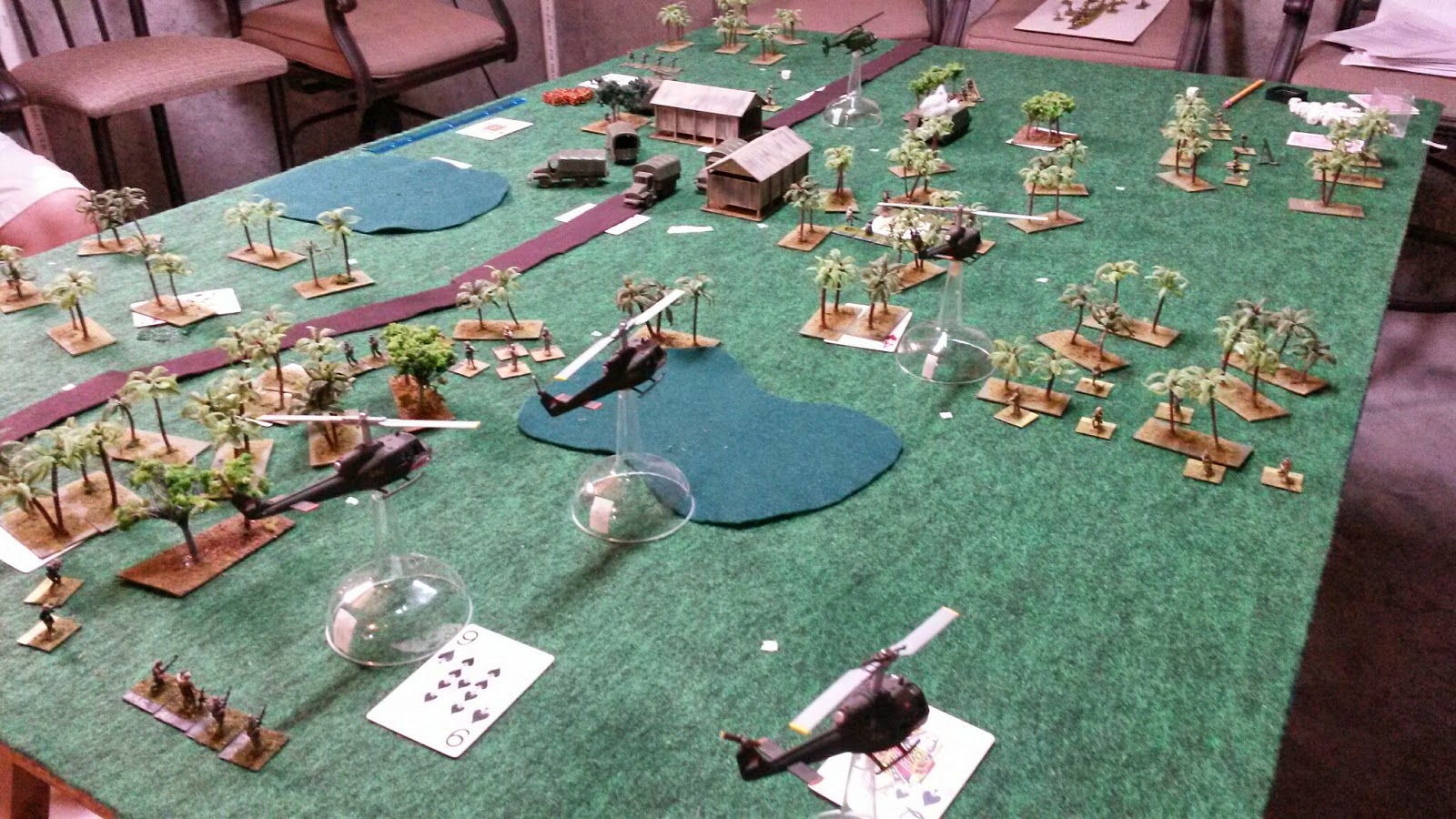 Every square section of the table was an encounter area that produces a card draw that is referenced to my written chart of encounters. 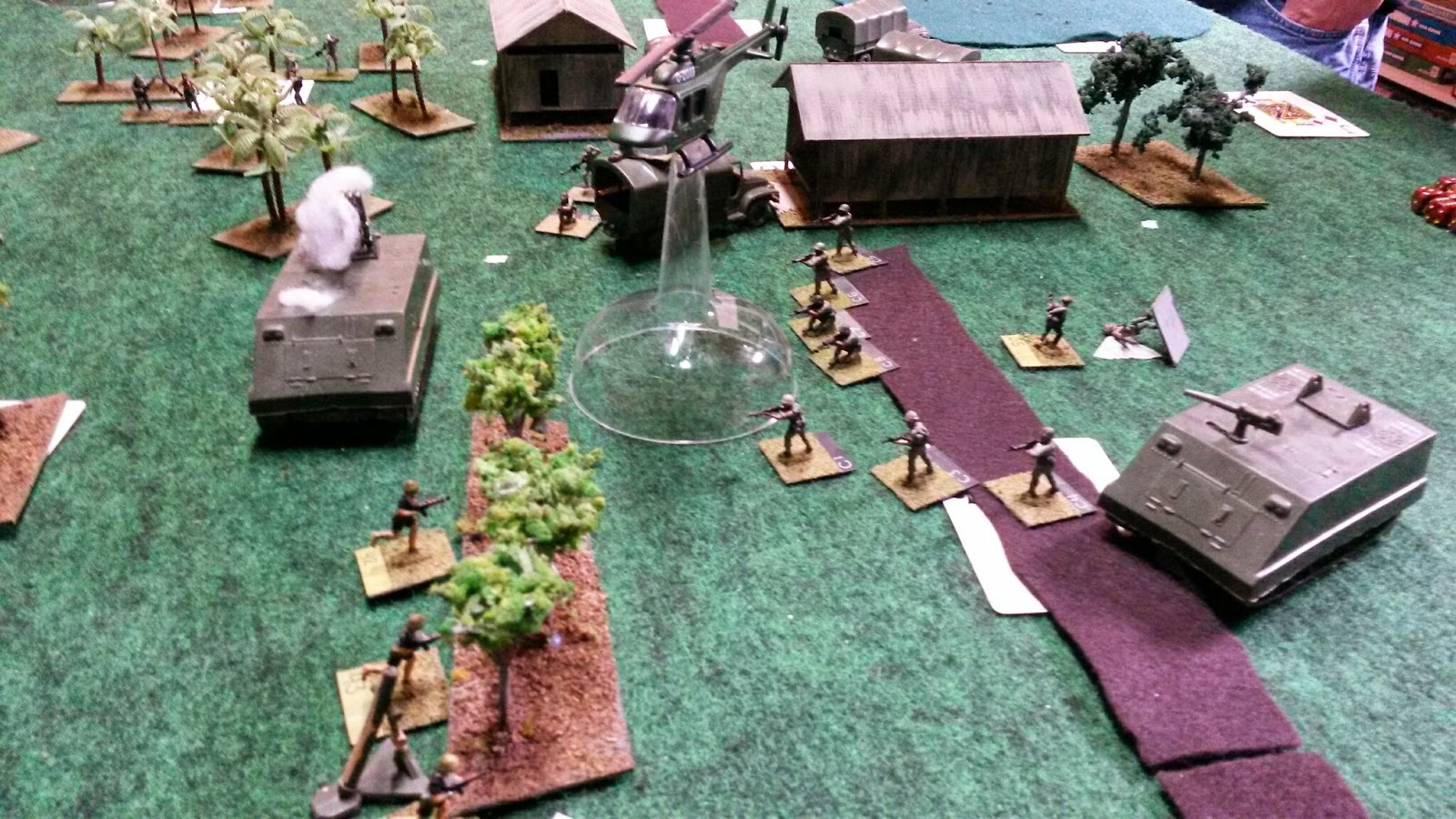 This running of the game produced a lot of VC patrols, civilian encounters that needed US aid, a tunnel complex, several mortar teams, and then reinforced North Vietnamese Army Regulars with artillery support. 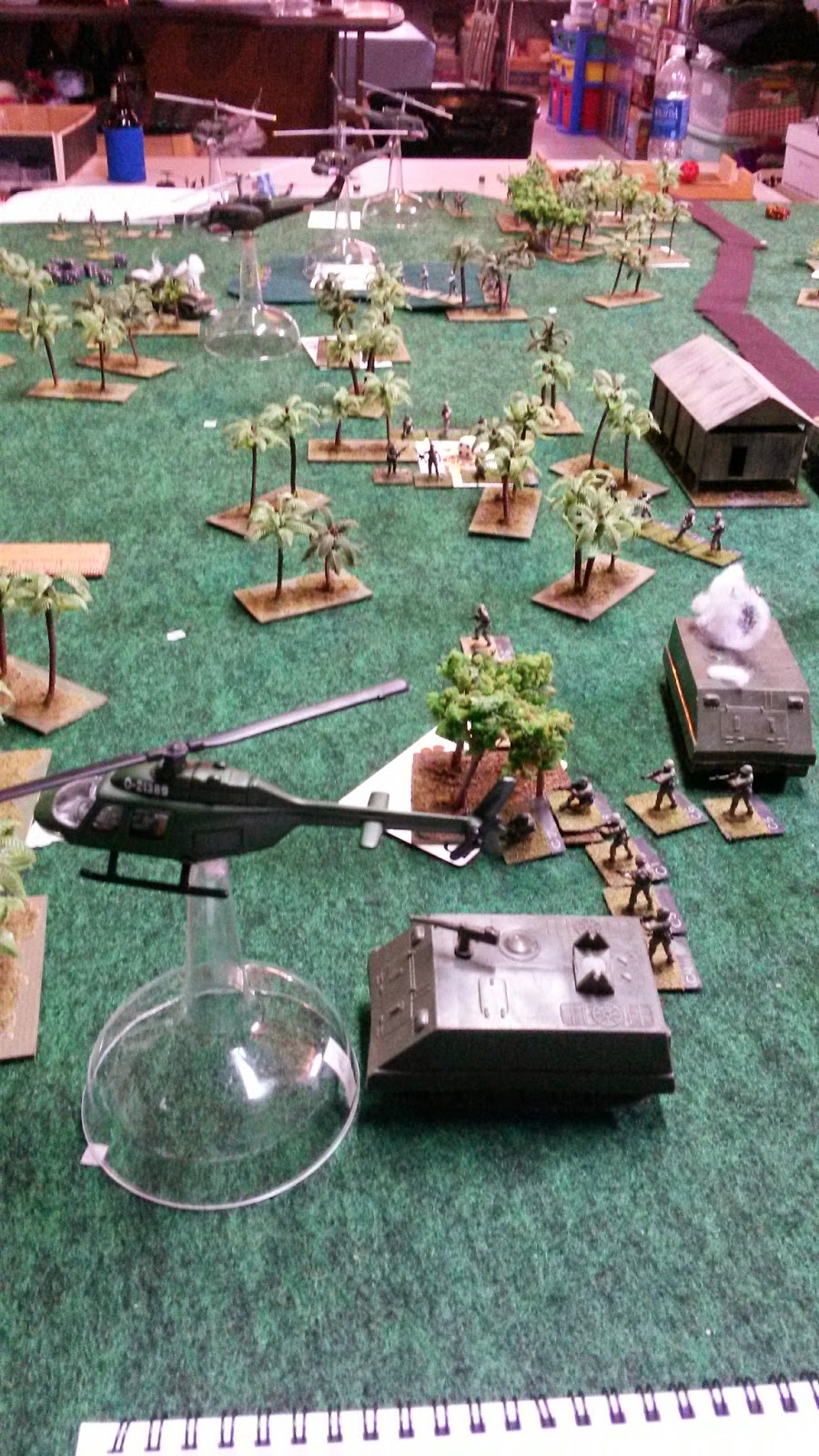 US firepower wins the day.

Next update: the body count....
Edit:  We continue now with the S3 report for the Conn-con Operation.  US Battalion casualties included 44 infantry fatalities, 1 lost M113 APC, 1 severely damaged APC that would need a recovery vehicle, 2 damaged helicopters.  VC body count was 135 infantry fatalities, two destroyed mortar teams, and 1 damaged truck and destroyed towed artillery piece.  Significant military intelligence included the discovery and destruction of a communications center and tunnel complex near the village of Lam Tri, two groups of civilians detained and moved to redistribution camps, and numerous weapons and food cache discovered in the valley.  US forces will need to do an additional sweep of the valley