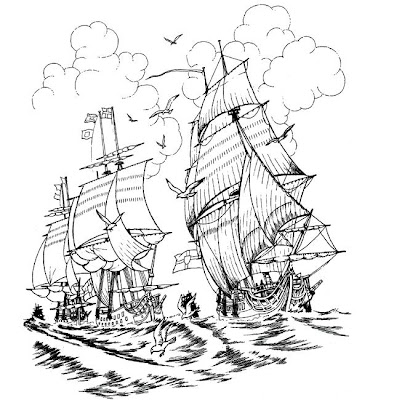 The concept for the combat system and most of the rules structure are indebted to Brother Aelred Glidden and taken from printings in the Midwest Wargamers association Newsletter.
The adaptation that the careful reader is now considering is a description of how the rules where used in the ten year long campaign game that has been played by members of the Lion’s Den Wargames club of Kansas City, Missouri. We have embellished the game with the requirements of our campaign and refer to it as Full Sail, which in turn is a play on the title of a space-based ship to ship combat game, which our club plays. Much of what occurs in a role-playing campaign based miniatures wargame is off the cuff interaction between well wishing members of a fraternal organization and can never be captured on paper. What we have here is only the remembered useful bits that are recorded for ease of use. Where these rules fail you, you must realize that they are only the merest wind on a huge sea of encounters that were adjudicated under these instruments. Sail with a fair wind lad and keep a sharp weather eye to the horizon and cry out from the quarterdeck – FULL SAIL!