This was last Thursday's exploration of the city of Gotham. All of the events transcribed under the watching eyes of the Batman. As he reminisced from his rooftop perch on the evening and the events surrounding his parents death. 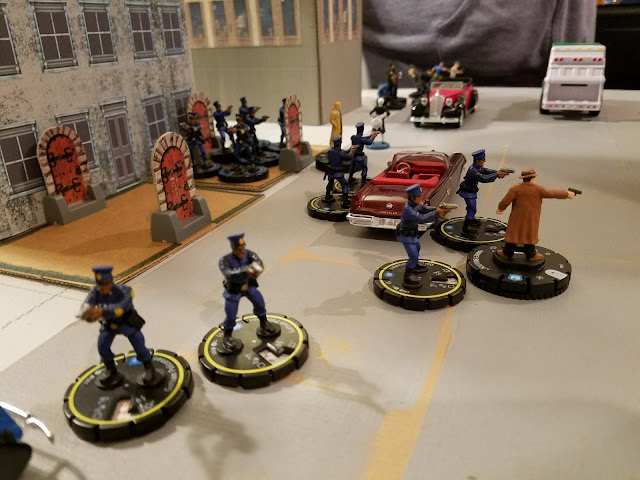 As darknesss falls on Gotham the night shift heads out to their beat assignments.  Each night brings with it it's challenges for the detectives and policemen of Gotham. (All miniatures in this scenario are Heroclix, and vinyl personalities from SNL Trivial Pursuit, and Clue.)

The campaign game that we are starting in the Secondhand Lion's club is Gotham by G.A.S.L.I.G.H.T..  I am using the core rules, parts of To Be Continued..., and Expeditions GASLIGHT.  I have a unique character advancement chart that I have created based on the progression of a character development in the world of comic book heroes of old. 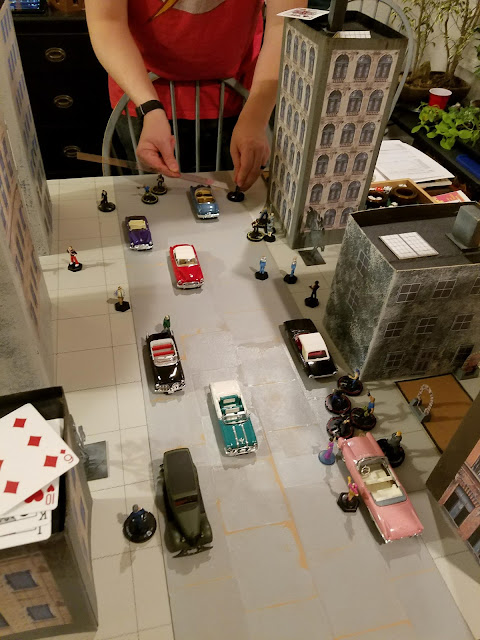 As with the law, so with the criminals.  Each night brings on a "shift" of sorts where all manner of depredation will be plied on the citizens of Gotham.  This scenario or Chapter 1, is entitled "Park Boulevard - Rebels Without a Cause.'  I started our players out as common thugs involved in a gang.  The gangs would compete to see who could commit the most crimes in the scenario and thus be declared "Ruling the streets" of Gotham.  GASLIGHT is a card driven system and we were dealt cards and played out our team from high to low.  I would play as the police this evening and I was facing three criminal gangs commanded by Mr. Tim, Mr. Terry, and Mr. Ted. 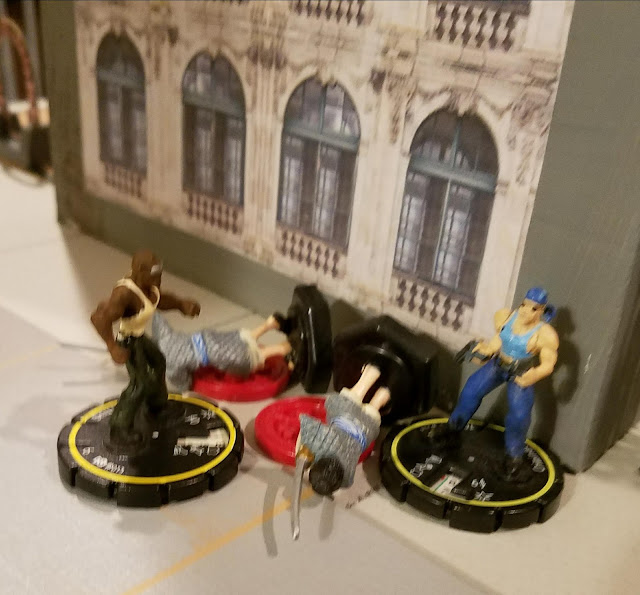 The first crime on the film roll was this double hit in China town. Down went a fry cook and a sushi chef.  The red chips denote a successful crime vs. a citizen.  The gang would then need to bank these chips in their hideout to keep a running score of the crimes committed during the game.  Terry's East Side Hoodlums were on the board. 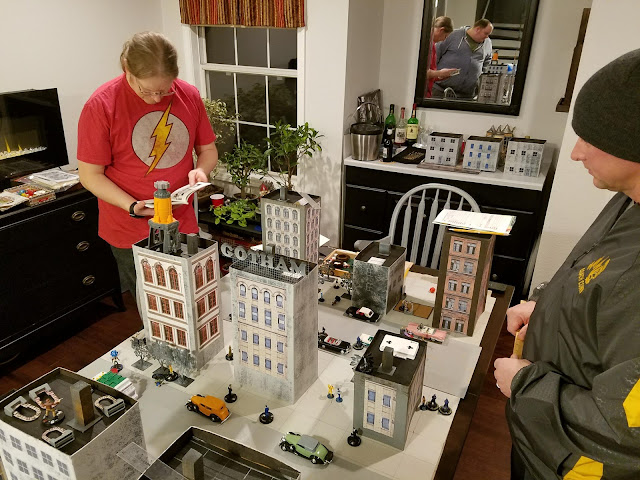 A nice view of the full Gotham environment.  N. Park Blvd at the bottom of the image with S. Park Blvd in the background.  Terry scans his comic book character sheet and Ted scans the streets of Gotham looking for an easy score.  In the mirror on the back wall we can see the North side crime boss Timmy also sizing up his chances to get this city under his thumb. 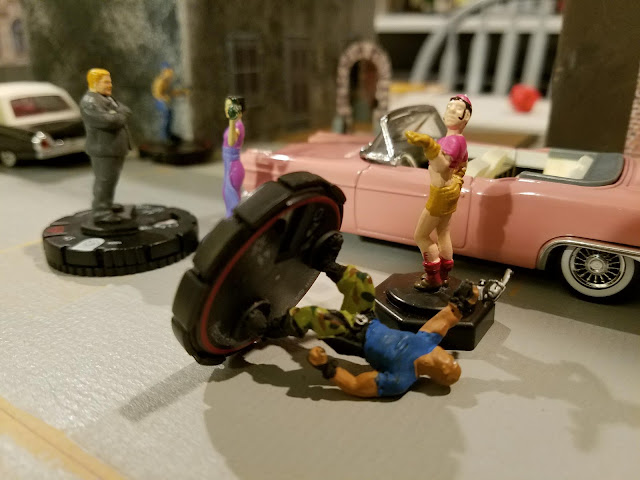 The West side gang lead by the criminal element of Mr. Ted would find that some citizens had a bit of bite in them.  Take as an example this effeminate Park Blvd. performer: Citizens 1, Criminals 0.  He was a Scuffle:7 and didn't take crap from the  armed thug trying to rob him.  The gangs were lead by a rolled up character personality with a higher Shoot, Scuffle and all the attributes in TBCBG.  Their extras were common thugs with a Shoot, Scuffle of 8.  As they died the director made an on camera decision that if the police got to them they would be arrested but if another gang member could get them back to the gang hideout they could be revived and back in the game. 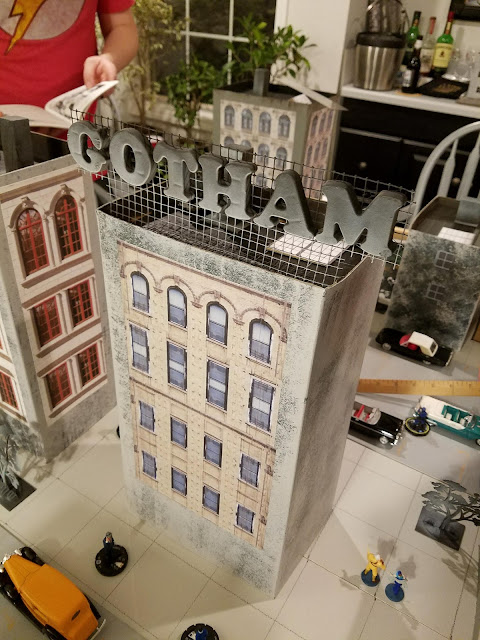 Cue background music as we ponder the Gotham billboard. (Made from refrigerator alphabet magnets.)  Thomas and Martha Wayne can be seen strolling with their son bottom right.....) 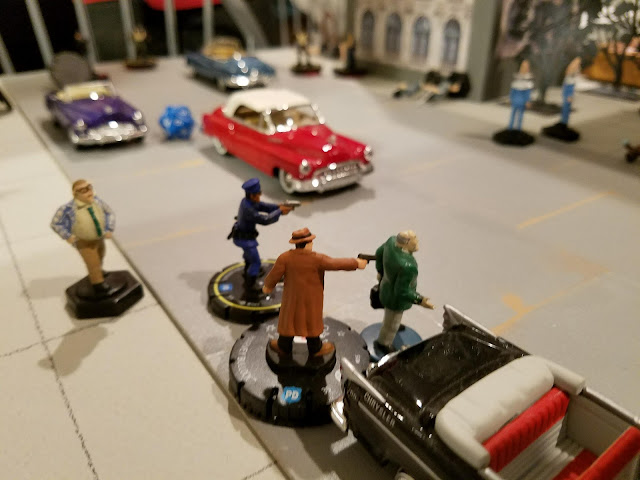 My detective with backup tries to make sense of the crime scene he is witnessing.  The director declared that all gang leaders were known wanted fugitives and could be pursued with deadly force on sight.  Gang extras would only be pursued if they were committing a crime or were in possession of a red chip from a previous crime. 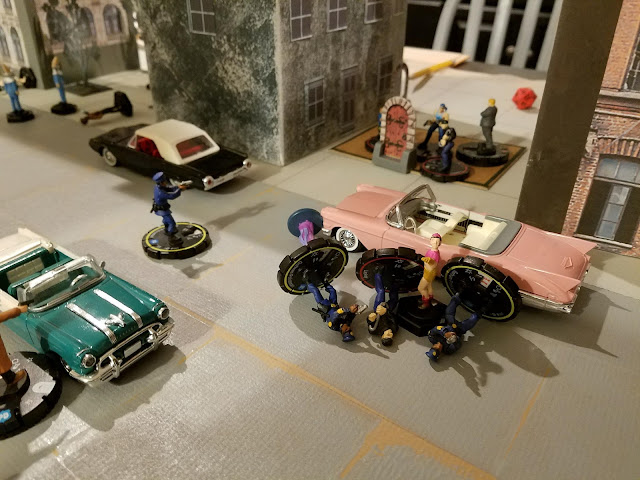 At a certain point I have a saying that goes, "when the cat hits the fan," things got crazy out of control in West side!  Look in on our flamboyant stage actor as he knife fights another thug and then an arresting policeman!  The pink bloodbath would become a moment of legend in this game!  The other policeman on the left of this magenta conflagration was downed by the prone thug. 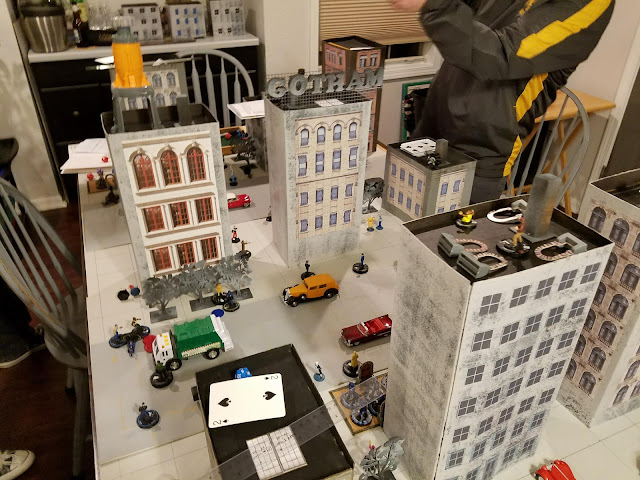 Back up north things were progressing and to a large extent looked like the game was going to go north.  Look in on the middle left and see criminals high tailing it back to hideout in possession of some "loot". 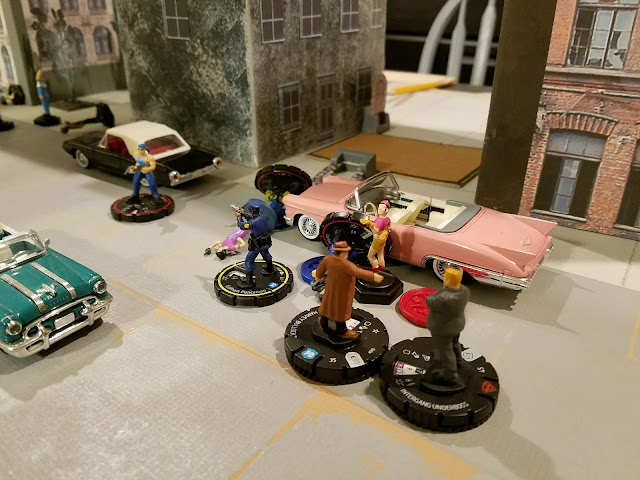 Ted's crime boss and my detective go toe to toe in the streets pretty much not wanting to get near the stiletto bloodbath. 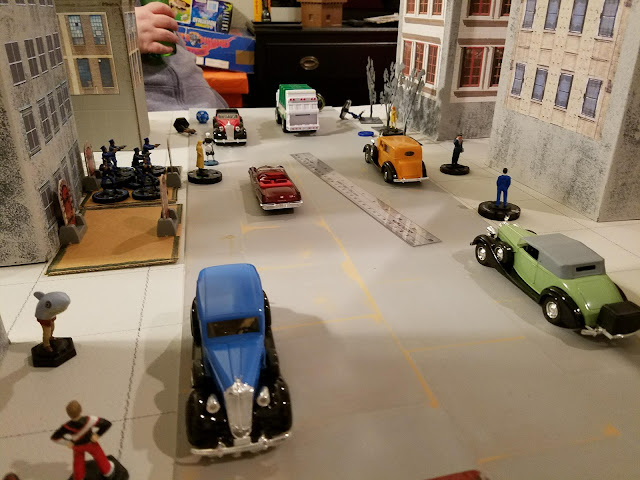 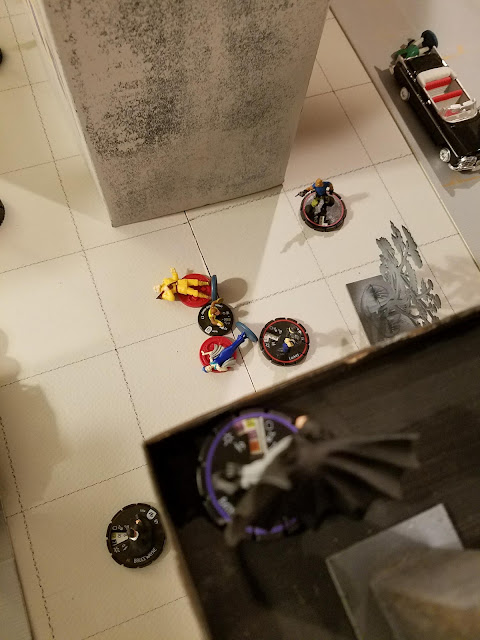 And then it happened....Thomas and Martha Wayne were shot and bludgeoned to death!!!!

I made Ted roll a Sense check on his character and his success meant that his criminals could feel a sense of being watched and then fear came over them.

At this point I described to the players that this was the night that the Batman's parents were murdered in Gotham.  And that on the anniversary of that event the Batman always revisits the spot of the crime.  Here tonight the Batman has been watching and reminiscing about all the things that went on that night - when his parents were killed.  Everything that took place on the game table was part of that night.  Duhn, duhn da dahhhhnnnnnn!!!!! 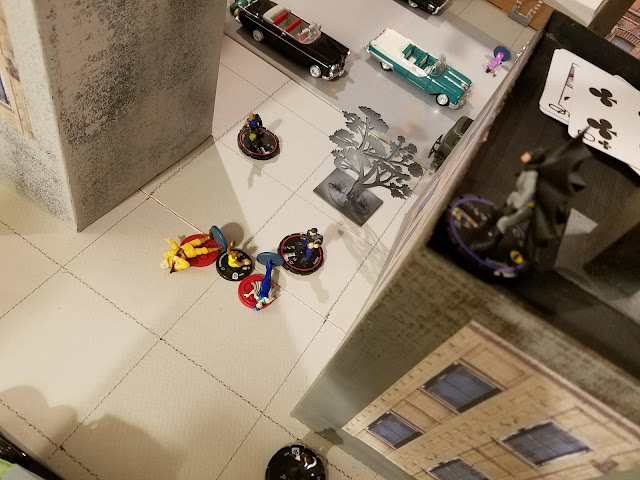 A cool way to make the origin story of the Batman part of our campaign game. 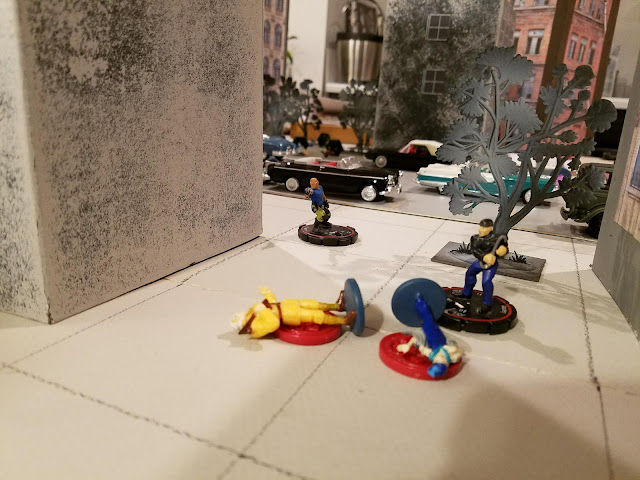 These two miniatures in my collection have been marked on the base as having been at the scene of Batman's parent's murder.  What lies ahead for them!!!! 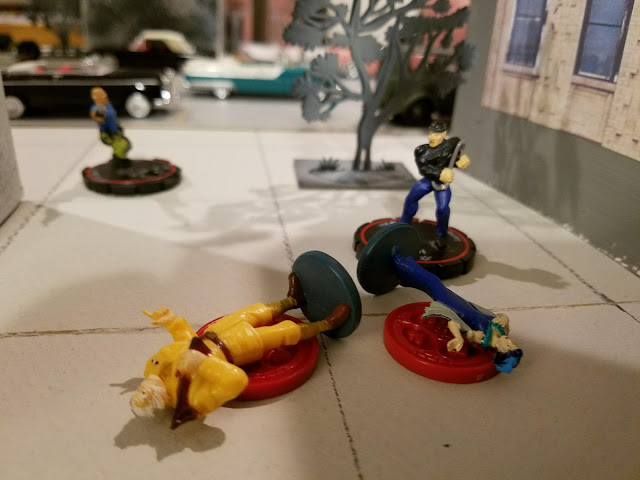 The gruesome scene in all it's horror!!  It is enough to drive a man mad with rage and make them want to seek a lifetime of vengence!

The East and West side gangs tied for the score on crimes.  Seven each.  The climactic scene was enacted.  The North town gang was really faring well and then they shot at a detective outside the front steps of the police station so the director activated the police and the result was a crushing blow to North town gang.

So faithful reader if you have made it this far here is what is in store.

Chapter 2 "Something's Gotta Give"  The streets of Gotham have become a madhouse.   The gang war between east and west will be the focal point of the next chapter but what attention will this draw from the law?  What attention for that matter will it draw from crime lords with significant power??!!

On the anniversary of his parent's death, Batman visits the scene of the crime all those years ago. 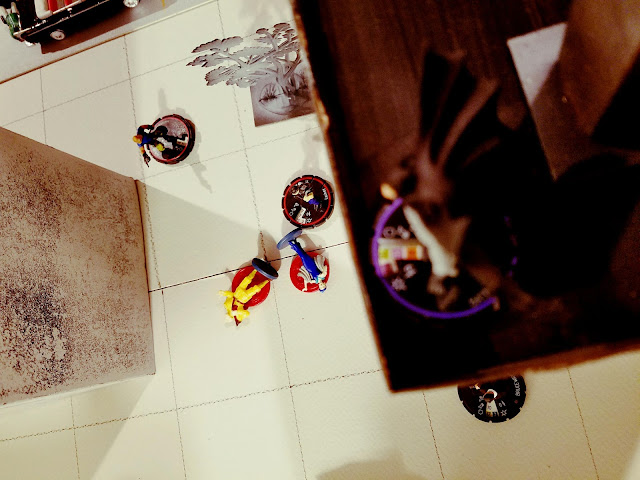 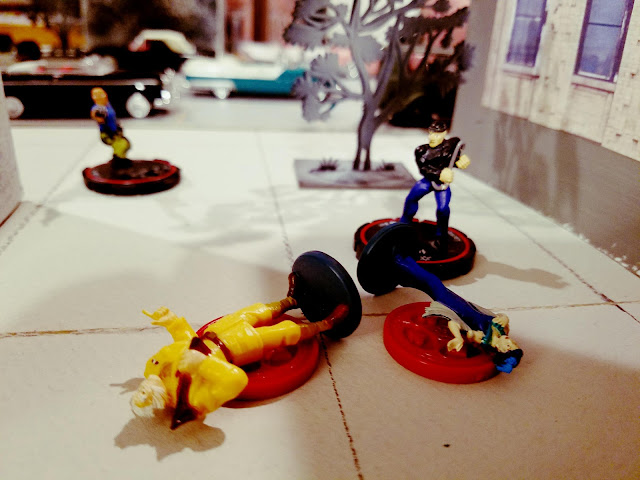 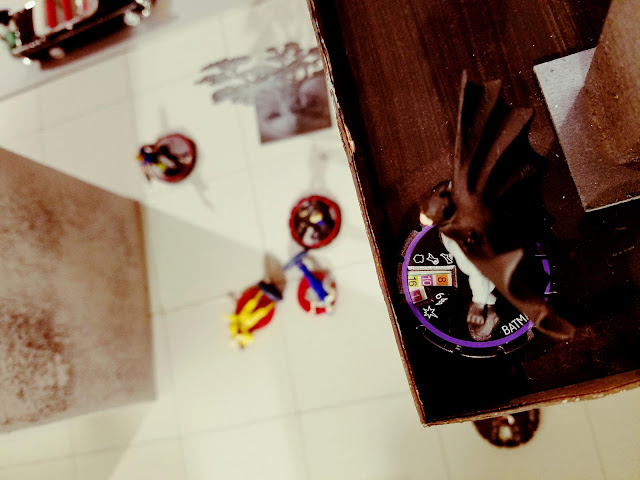 This is a complete sneak peek of the Thursday night to be--- game. 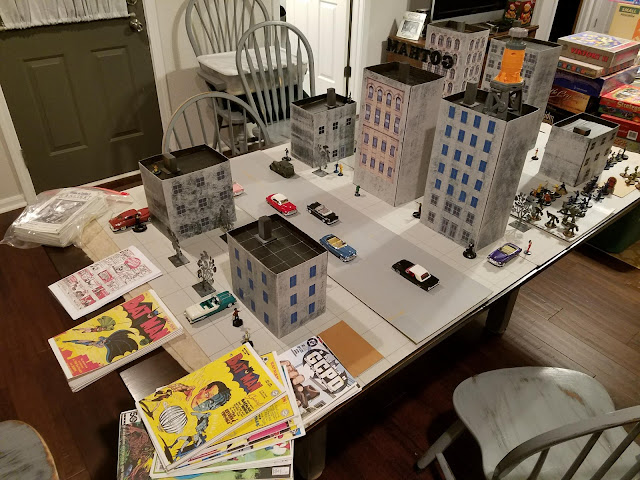 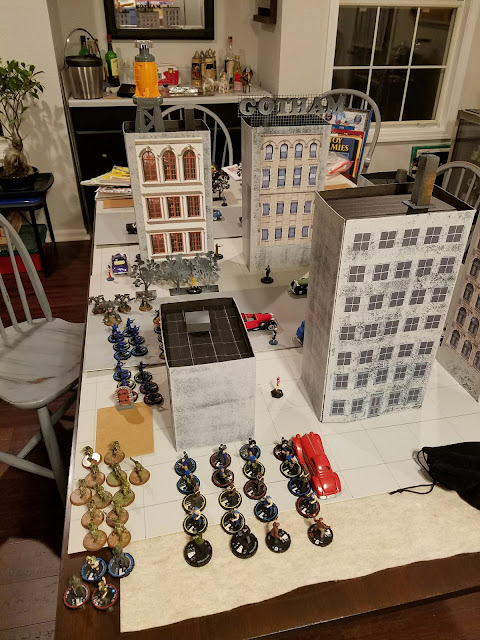 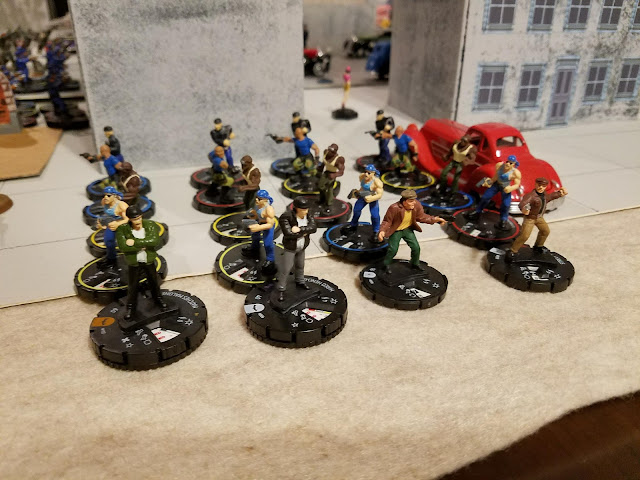 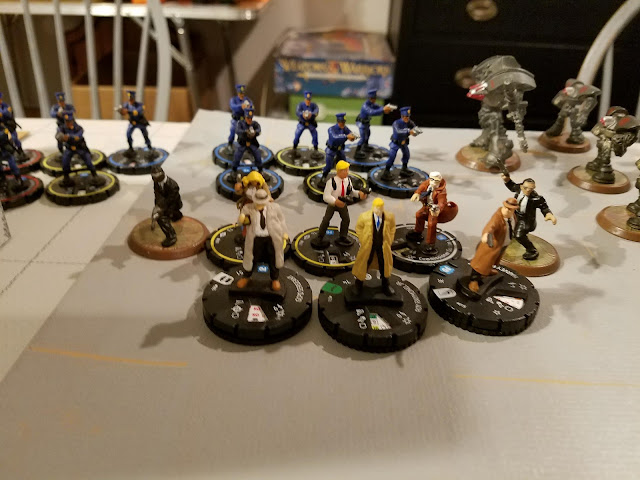 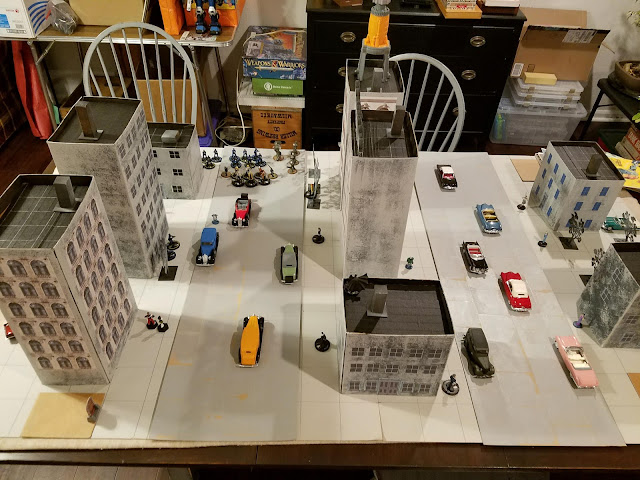