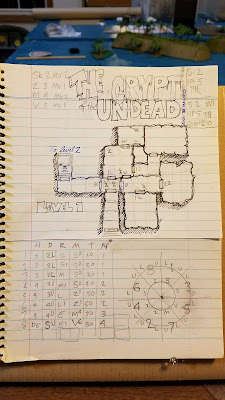 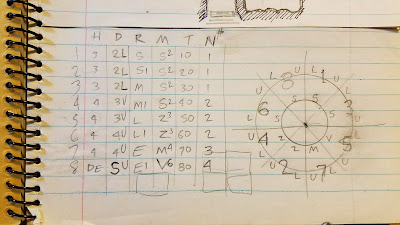 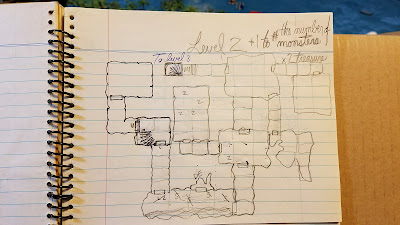 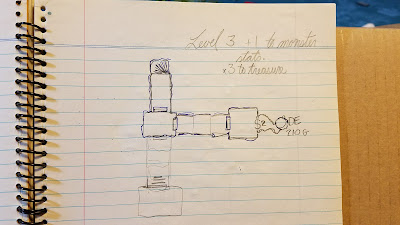 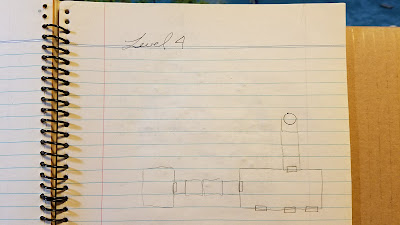 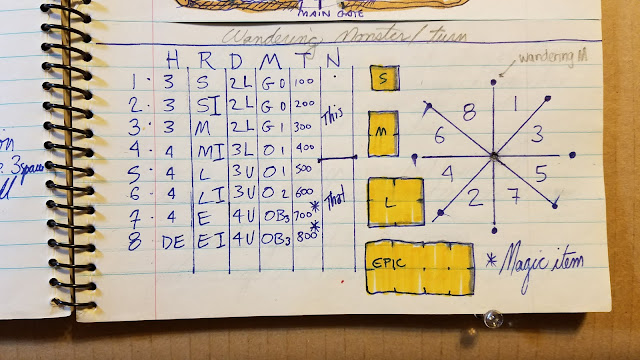 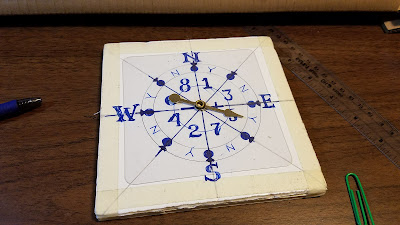 An elaborate version of the spinner.  With a clear overlay spinner I found at school. 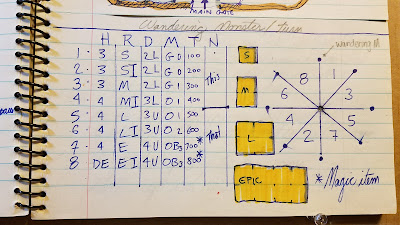 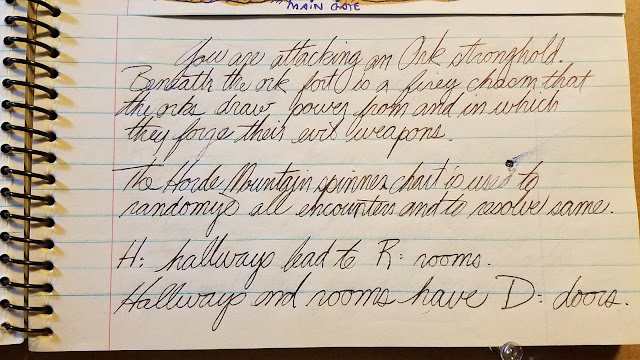 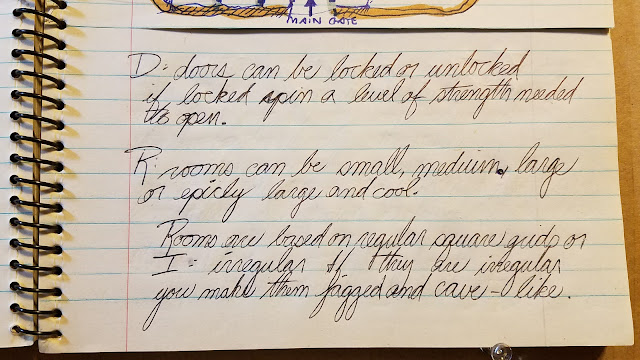 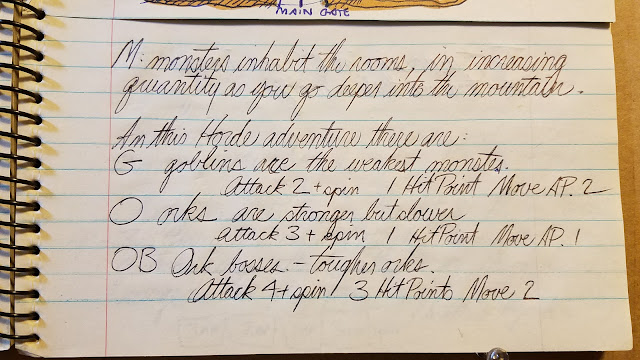 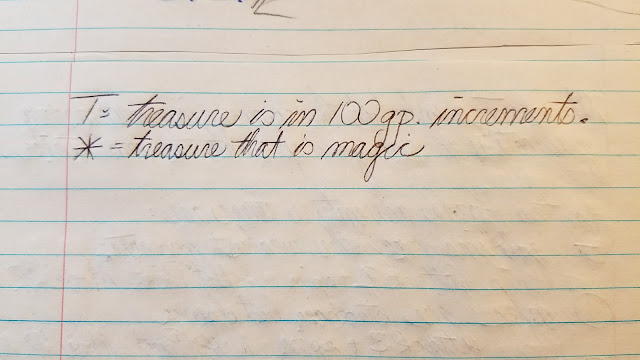 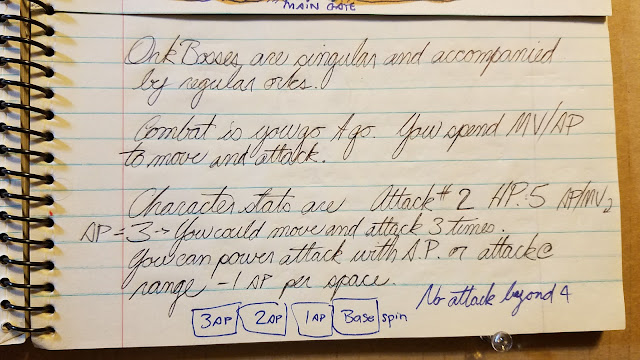 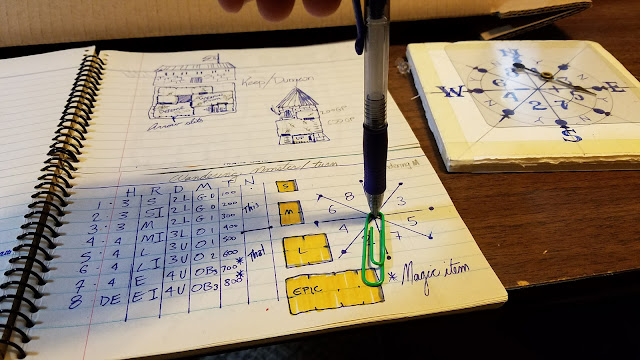 The Battle of Lion's Port

The British admiralty tasked commodore T.M. with the simple task of securing a desultory manned French outpost village in the remote island archipelago of Coatzacos.  The island chain consist of three tropical strips of land named Scurvy Cay, Neptune's Lair, and the main island of Coatzacos.  The seat of commerce in this far flung island was the city known as Lion's Port.  A modest French held colony of fishermen and farmers.  And a refuge for pirates. 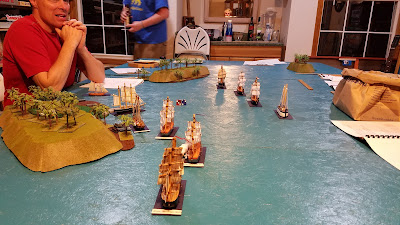 As the squadron of British warships sailed into the vicinity of Coatzacos, French heavy warships arrived to intercept and stop the capture of Lion's Port.  WHAT!!  Where did these newly fitted warships come from?!  What source of revenue could possibly procure and man such huge ships of war.  A first rate 120 gun ship The Montagne, a 84 gun ship the Sans Pereil, and a 110 gun ship Terrible, lead by a coastal pilot ship 5th rate Tanis! Manned and victualed by the devil himself. 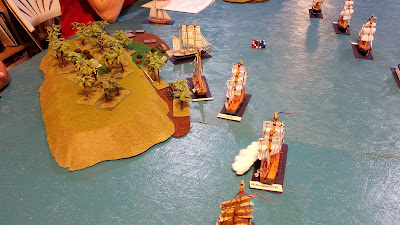 There was naught that the British squadron could do but to carry on the mission in the face of dangerous odds.  The Culloden 5th rate troop ship struck for the island and began landing the troops destined to garrison the island.  They met immediate island gunfire from a shore battery but courageously carried on their duty.  The Royal Sovereign 100 gun first rate covered the rear of the squadron as the two 74's Bellerophon and Patriote engaged the shore guns and then the French fleet proper. 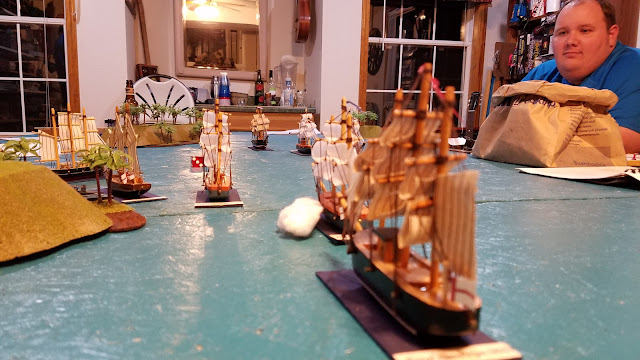 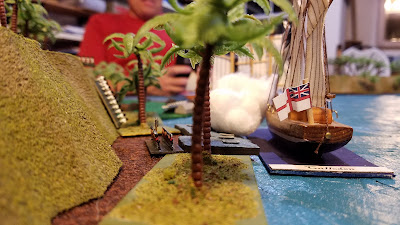 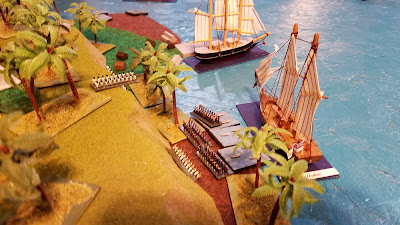 Island fighting with formed up troops in the old fashioned way. 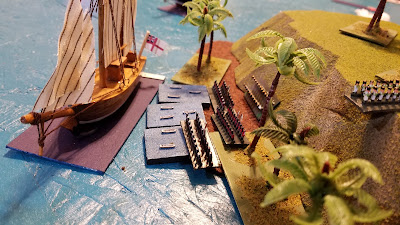 The attacking British would carry the day on shore, but what about out in the waves.  Perhaps a different story awaits the fleet. 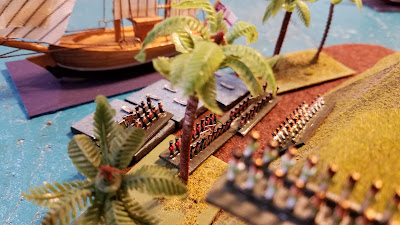 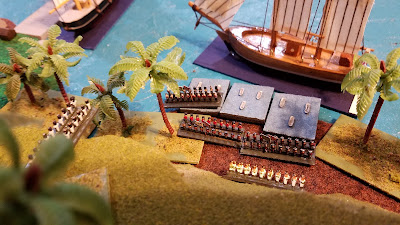 Give them the bayonet!! An abandoned flute, the Derapager rocks at anchor tethered to the wharf.  As infantry skirmishing can be seen in the distance down the beach. 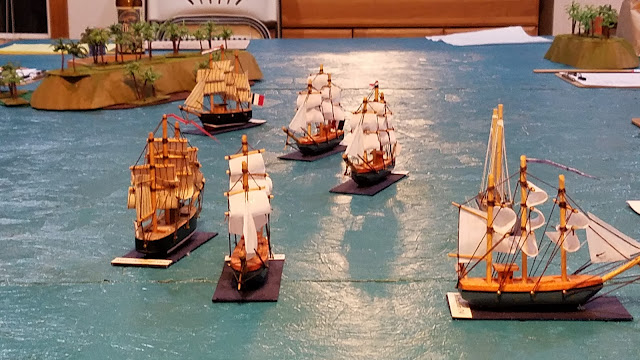 Out in the surf this four on three rag wagon duel would tell a different tale.  The first ship to commit to Davy Jones locker was the pilot ship Tanis.  Sunk under combined fire it would not last the engagement.  But then the Patriote hauled down her colors as the guns of captain J.M.H. were silenced by overwhelming enemy fire.  Then captain K.V. crossed the t of the enemy line but he too would get his in the end.  A catastrophic initial broadside rake from the Montagne would scuttle that boat and send it bellow the waves.  The crew of the Bellerephon took to the long boats and rowed for Scurvy Cay. 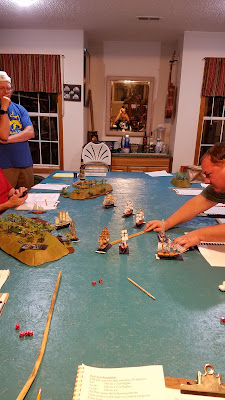 In the end the battle on the water was a French success.  The Royal Sovereign was captured in a bloody melee boarding action and the only British ship to escape was the unloaded Culloden.  Heavily damaged and devoid of her cargo, the Culloden slipped into the night to pick up survivors and carry the tale of the battle of Lion's Port back to the admiralty. 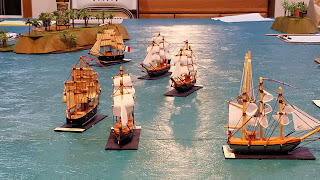 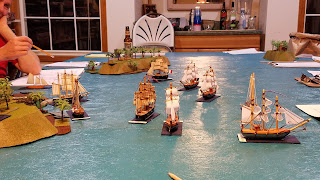 Tune in next time when we see the Secondhand Lion's play the other side of this coin. 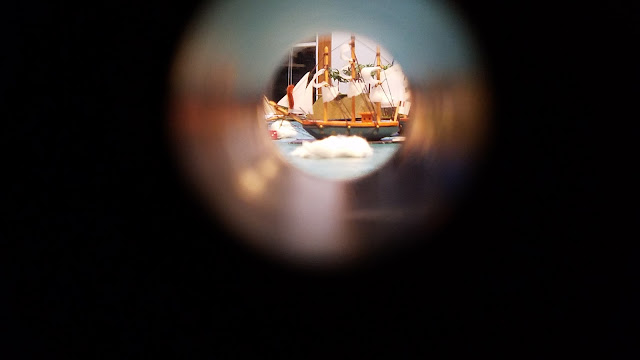 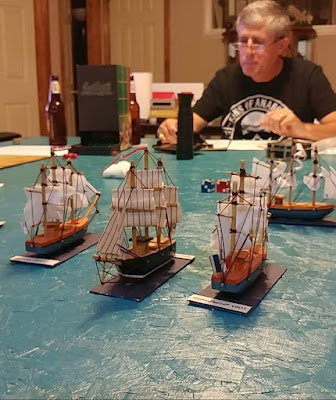 A good shot of some old guy playing at ships.