Played an evening of Hordes of the Things with a US Western Plains Wars theme. 48 point armies based on American Indian Warfare of the 1870's. Pictures included for your plastic playset amusement. (Painting of the miniatures to commence once the idea is established and worth playing more games.) 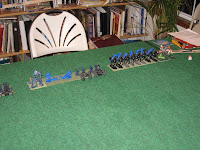 The US Cavalry army of Lt. Conn deploys with one column on the left flank and one column on the right. 24 points of HotT US Department of the West divided into two commands. Lt. Lathrop would show up later to command the right column - and this would prove a decisive moment in the action. 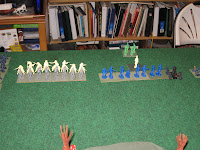 Lt. Lathrop's command. Knights, blades, artillery and a magician. Yes that is a Marx Abe Lincoln. His pressence is that of an Indian agent - magician.
The western plains Indians danced and danced the whole night previous to the battle and brought into existence the very strong presence of the windago. The tribal spirit was embodied into a behemoth werecreature. Two bands of warriors divided into 24 point HotT commands. 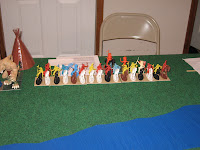 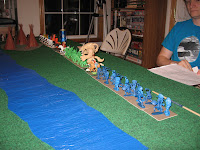 The stream was fordable at all points and provided a +1 for the defender of the river bank. 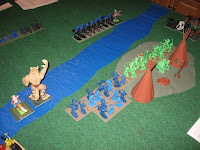 The built up areas were villages. Terrain marked by the cloth and the village pieces being movable to allow troops to move through. 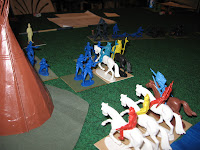 Ken's warrior band was doing well untill a small group of ponys were cut off and sealed the defeat. Lost 11 points to 12! 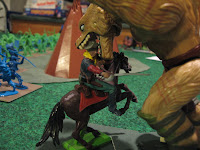 When windago's get hungry - nothing satisfies like a paladin snack!

Final action of the game. Lt. Lathrop sends the Indian agent to dismiss the foolish beliefs in spirits and werebeasties. Magician vs. behemoth and poof. No more beastie. Reminiscent of the final scene of Monty Python's Holy Grail were the authorities come in and pack up the whole lot and disperse the armies. 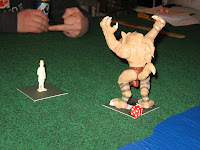 "All right then off with you. Get back onto your reservation. Go on!" 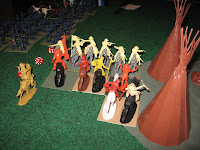 Another scene very near the battlefield edge. US Cav (Kn) vs. Hero General, riders and a magician.

Hordes Out West or "HOW" 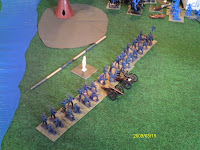 The new project of the day is to create a Hordes of the Things army with figures from my 54mm American Indian Wars collection. The variety of armies I have available is very diverse and made for an interesting evening of positioning and inventorying the miniatures into the rules set versions of 24 point armies. I made three armies for the US Western Army. All three had 6 stands of US army infantry/shooters (12 ap), 3 stands of mounted cavalry/Kn (6ap), and then 2 artillery pieces a gattling gun and a field piece (6ap). 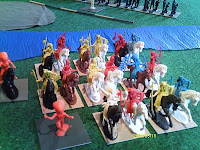 The Western plains Indians were a blast to assemble. Lots of hordes armies capable and a full army of riders was easy. So much variety that it would be tedious to retype the permutations.
Tried out a game today with my son Tony. He played US and took my base army and swapped out the mounted cavalry for another infantry stand and "The Great White Father" GOD (4 ap) in the figure of Abraham Lincoln!
Pictures will complete the afternoon of gaming and fun. 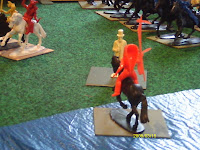 When a Hero confronts a God in the old West! 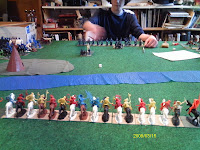 The armies are built and set up across a small stream near a built up area represted by an Indian village. 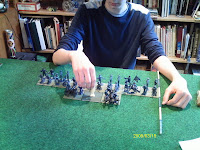 I think HOtT will allow for so much creativity and the ability to make complete projects. Somethng nice about having a do-able project. The reason the figures are unpainted is because the task always seemed so un-do-able and too much work to make happen. With Hordes Out West, I think I will paint at least two armies - one for each side and then maybe branch out and paint more of the options for the game.
Thanks for checking this post out and have a great hobby day!
Posted by Gr33nw00d11 at 12:52 PM 4 comments: 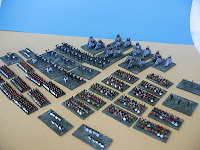 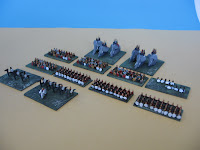 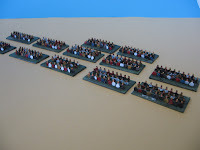 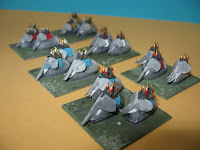 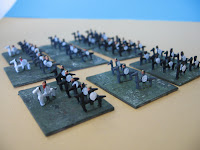 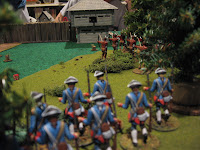 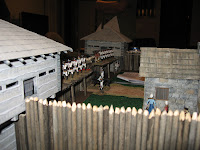 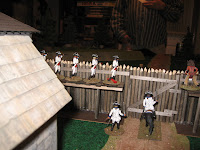 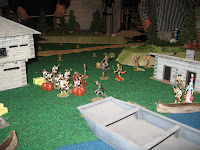 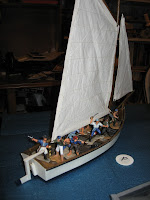 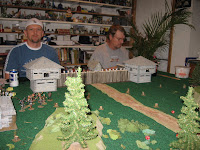 Our second game of the rules featured a rebuilt stockade fort. I built the blockhouses some 18 years ago and rebuilt the stockade walls just recently in February 2010. Each stick was cut and whittled by hand.

This battle featured French defending and with Courier du Bois and Pirate or Privateer allies.

Attacking were the British and their heroically brave Indian allies.