Song of Arthur and Merlin Song of Blades and Heroes

King Vortigern had given the summons to call out the retinue. All artificers and craftsmen had been summoned to build a tower of refuge for the king. The land was invaded and loyal house knights must earn their keep and pay homage to the usurper king and try and keep their fief controlled and free of invading looters.
Sir Gafannon, Sir Tylyd, and Sir Tywain and the men at arms that were in the vicinity of Lincoln castle began a progress of the fief looking for invaders. Duke Aeron knew that being so far to the north of London it was not likely that a large army was in the area... 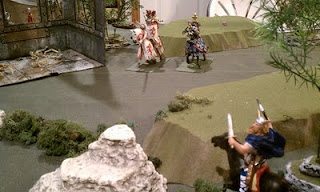 Near the perilous chapel an enemy patrol was encountered. Saxons mounted on horseback and a fyrd levy were looting the local countryside. 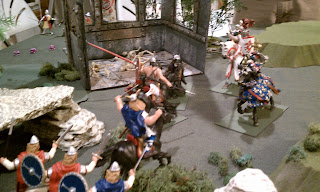 The Song of Blades was commenced. 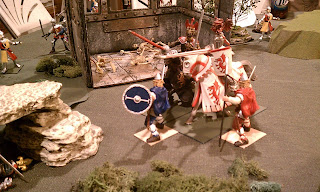 Sir Tylyd and Tywain charge in amongst the fyrdmen. Hacking and slaying the enemy. 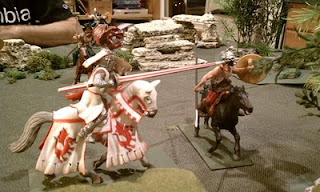 Sir Tylyd pokes the Saxon Rider right in the eye!!
The evening ended with one of my favorite kinetic adventure games. Dragon Strike MB. 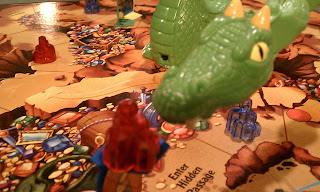 and I got the Dragon's eggs out of the cave and won.

Guest article written from the desktop of the Kurita commander, Ted Conn.

we rejoin our broadcast already in progress...

Intro: It has been almost a year since we started the Proserpina campaign. For info on the first installment of this campaign, go to http://www.boardgamegeek.com/thread/522394/the-battle-for-proserpina-part-1.

I will refresh some information originally relayed in ‘part 1’, as it has been a while! The variant rules we use in this campaign are here on BGG. Info on the variant, called Call To Honor, can be found here: http://www.boardgamegeek.com/thread/271685/mechwarrior-call-to-honorSetting:Proserpina is a world ravaged by war. Nuclear fallout, scorched earth policy and various highly contested engagements on the world have led to the creation of several continental 'Dead Zones'. Fast forward several years. The Draconis Combine (House Kurita) rules with an iron fist. Dirt poor people scratch out meager existences by foraging in the 'Dead Zones' and finding lost tech or anything else of value. The populace rails silently against the oppressive Draconis regime. The Highlanders, a collection of mercenaries (terrorists?), aim to throw off Kurita’s yoke and return Proserpina to its original ‘glory’...for some unknown entity.Situation:Kurita’s iron grip on Proserpina was challenged. Pride Town had been attacked in a most devious, yet disconcerting manner. Draconis High Command, while commending the actions of the planet side commander for his role in maintaining order during the attack, issued a military lock down. All civilian traffic was considered hostile while the situation was further assessed.

Within a day after the battle ended, recon ‘mechs to the NW of Pride Town reported a large column of civilian vehicles heading toward the ‘Dead Zone’. A majority of these vehicles appeared to contain supplies that a settlement would require: Foodstuffs, housing fabrications, etc. As this information was relayed, a sizable force of armor and infantry appeared from the ‘Zone’ in question and assumed a defensive position along the vehicles’ route. Oddly, their IFF signatures didn’t signify ‘foe’, even though the recon ‘mechs could clearly see they weren’t Draconis forces. The planetary commander didn’t waste any time dispatching three lances of ‘mechs, air cavalry and power armored troops to the location. The order was clear: There are no civilians in this conflict. Kill anything in sight.

Map:The map featured a road that ran from the SE to the NW. There was another road that intersected and ran straight north about 1/3 of the way into the map. The terrain was mainly comprised of rock formations and was considered ‘rough’ terrain for wheeled vehicles. There were two built-up areas on the map: A small resupply station in the SE corner and a heretofore unknown collection of buildings along the road, in the NW area of the ‘Dead Lands’. The insurgents were formed in a defensive position along the length of the western edge of the board. The Kuritan forces entered from the east, with the ‘mechs entering along the road in the SE corner of the board. Game:The objectives for both sides were clear. The insurgents had to get their ‘civilian’ vehicles off the western edge of the map. Kuritan forces had to inflict as much damage to the insurgents as they could.The game started with Kuritan forces, the 9th Benjamin Regulars (Ted and Carl), coming in ‘hot and heavy’ from the east. The ‘mechs pushed their heat sinks as they hurried to catch up to the fleeing ‘civilian’ vehicles. With insurgent military forces looming on the horizon, but still out of effective range, the ‘mechs fired on the convoy, knocking out a couple of vehicles and damaging a couple more. They then blended into the resupply station’s buildings and waited of the enemy to close the distance. Meanwhile, the air units and armor moved to engage the enemies’ defensive perimeter. They started giving and taking fire almost immediately. Even under this storm of tightly-knit energy beams and hot flying metal, the transport VTOLs continued to head due west, directly into the heart of the enemy’s formations.

The Highlanders (Bill and Ken) reacted immediately and aggressively. The SW mass of ‘mechs and armor moved toward the resupply station and the Draconis forces. They opened fire on anything within their HUDs, inflicting light damage to a couple of units. The center (west) Highlander forces didn’t have to move to engage their enemies, as the Draconis VTOLS and air support helicopters had not only moved in and started deploying power armored infantry, but had split into two formations near the Highlander rear. These aerial units took a great deal of damage, with two VTOLs knocked out of the sky.

The second Kuritan turn included a lot of action. A large ‘mech battle along the southern flank raged without any Highlander or Kuritan losses. The battle’s center was littered with dead forced from both sides (mainly infantry), but the insurgents’ IFF scramblers were discovered. Unfortunately, there wasn’t time to destroy them. The northern flank was stalemated by rough terrain and poor shooting, but both sides were closing to get into short range.

Unfortunately, the evening ended before a firm resolution on any part of the front could be established. We sat around the table and discussed what most likely would have happened, which brings us to…
Ending:The outcome of the battle wasn’t clear, as the conflict wasn’t carried to the end. Five convoy vehicles had been destroyed or rerouted to the north. However, some key points in the campaign were established.

Draconis-
The insurgents established a base of operations in the ‘Dead Zone’, which was believed to be uninhabitable. The exact location of this base is unknown. It is also known that the insurgents have the capability of masking their IFF signatures. This was evidenced in the initial Pride Town attack and was also observed during the attack on the convoy. This reinforced the need for martial law and the ‘shoot first, ask later’ mentality Kuritan troops had adopted. Some supplies did make it into the ‘Dead Zone’, indicating that the rebels’ continued viability in the area should be considered a fact. Incursions into the ‘Dead Zone’ to locate and destroy the insurgents’ base of operations are highly recommended.

Highlanders-
Things went according to plan, more or less. The damned Kuritans caught wind of our convoy and destroyed valuable supplies, but we did get quite a lot of supplies, ammunition and people to further our cause. We didn’t figure they’d open fire on the convoy, but evidently they are taking us seriously. Good. They should, because we’re in this for the long haul. With the old man’s information, we can pursue our goals to rid Proserpina of House Kurita and the Draconis Combine. They did discover our IFF jamming stations, which is a shame, but the information cost them dearly.
Posted by Gr33nw00d11 at 7:48 AM No comments: