A triple D B A Game featuring Seleucids  versus Ptolemaic.  A great forest of pike gathered Monday at M. Sanderson's house for a triple DBA fielding of the collection of S. Gross fantastic miniatures. 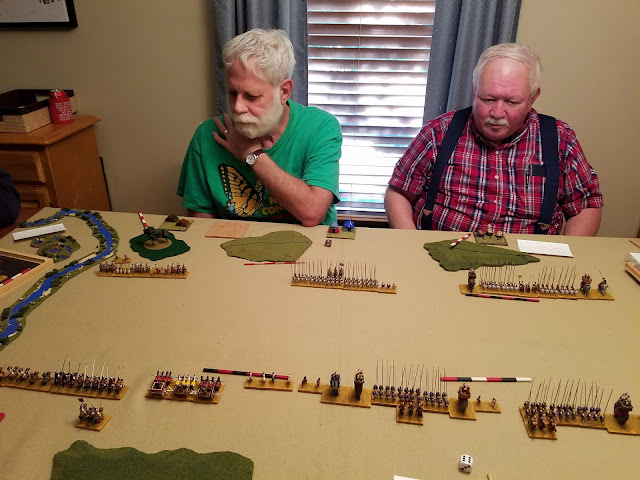 Above image: two of the three Ptolemaic commanders marshaling their forces across the quite open battlefield.  The left flank had a river but neither force deigned to use it strategically. 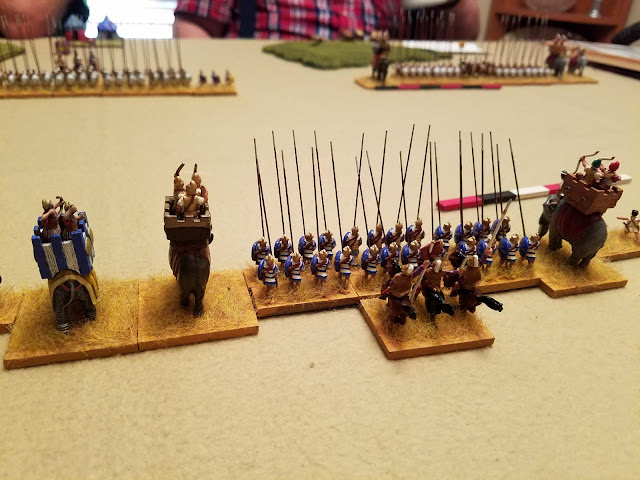 My command above.  Seleucid pike and elephants with a knight general. 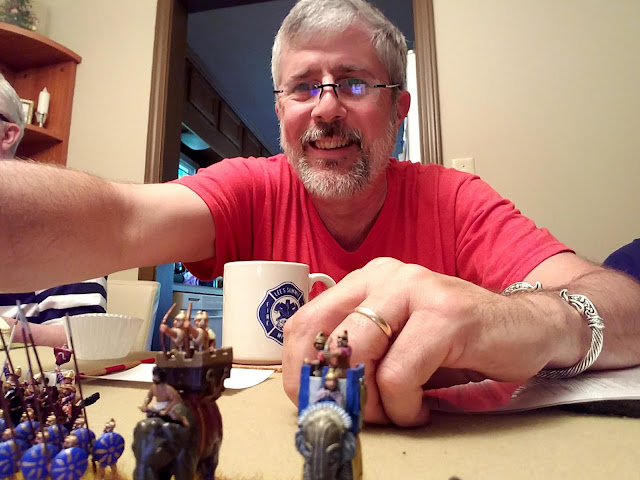 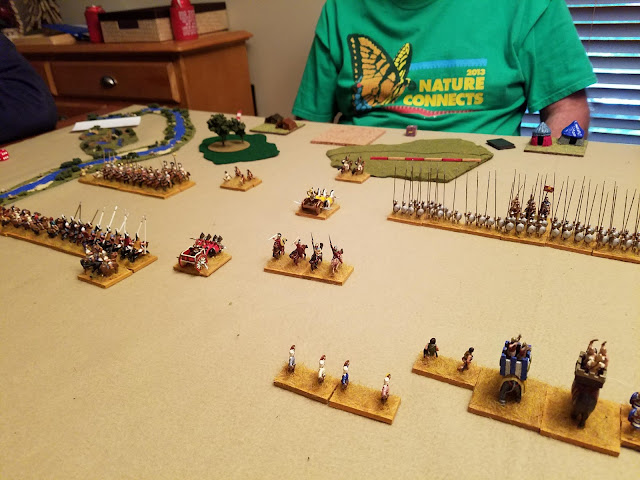 A view towards the left.  S. Gross would succumb to the Ptolemaic power first and our left flank failed.  Then the right flank general under C. Wilkowski would also fail sending that flank into a drudging army. 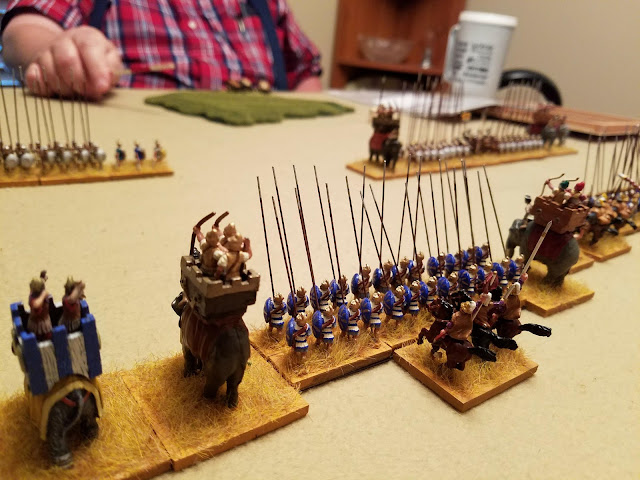 My center force crashed into M. Sanderson's force and we had a grinder of a battle in the middle using all the tricks in the book to try and decide the game.  In the end it would be the Ptolemaic forces that controlled Syria and the fertile grain basket of the middle east. 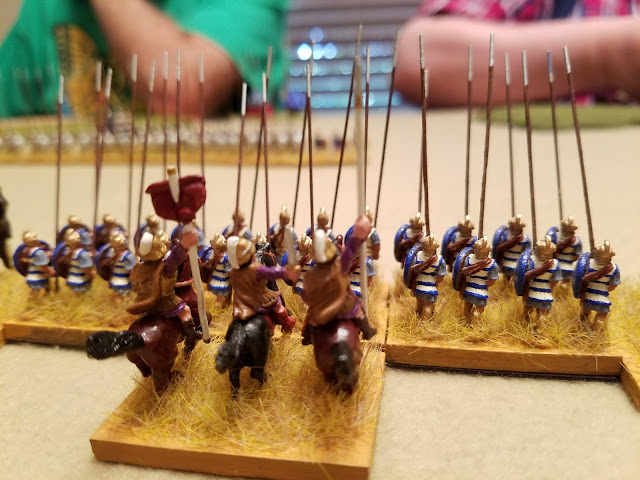 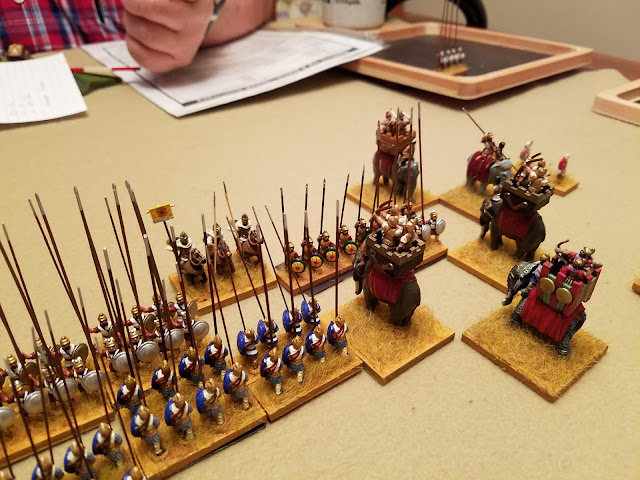 The most promising fighting that took place on our right flank Against C. Southard. 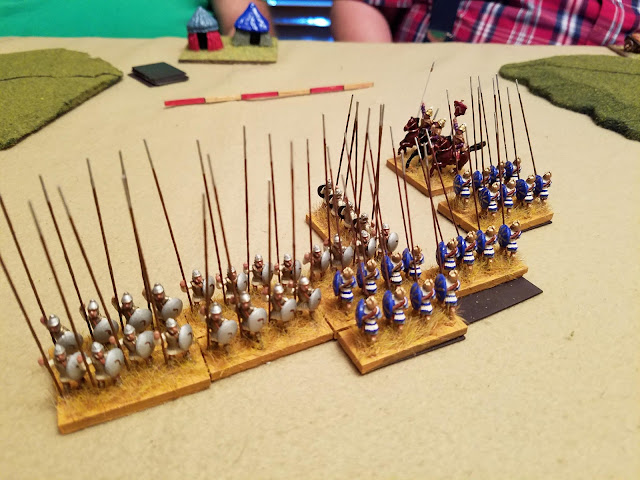 The end game.  I took out the opposing general but had demoralized my forces by losing more than four stands.
Posted by Gr33nw00d11 at 7:59 AM 1 comment:

Such a Beautiful Child

Torin Prime is a planet in the Outer Rim, colonized early in the 22nd century and location of the Torin Prime Civil War from 2106 to 2108.

History
In 2106, a group of terrorist rebels, called the J'har, openly opposed the United Americas' local government placed over the colonies on the planet. That same year the J'har attacked the capital, taking the planet and killing all governmental functionaries of the United Americas or otherwise incarcerating them in concentration camps. The United Americas Allied Command feared such actions would encourage rebellions in other colonies, and launched an invasion on Torin Prime to liberate the planet. The UAAC had the advantage as some UA loyalist remained on the planet and started rebelling against the J'har.

Both Dennis Parker and Arthur Dallas fought for the United Americas. Dallas served in United Americas Outer Rim Defense Fleet as a pilot on the UAS Leviathan (out of Liberty Echo) and received the Sunburst Medal of Honor. Parker was captured by J'har rebels during the conflict and imprisoned at Concentration Camp GR-161 on August 1, 2107. He escaped on February 21, 2108 during the liberation of Torin Prime by constructing an EEV out of scrap. Following the liberation, Dallas was promoted to Captain, and Parker received an honorable discharge and returned to Earth. 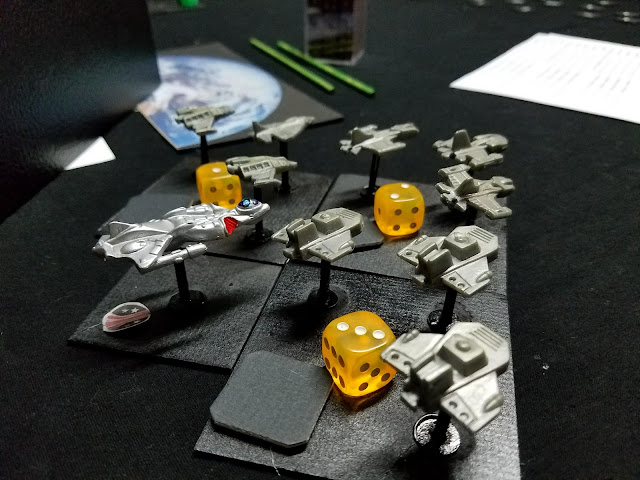 Structure
Within the UAAC, the USCM was tasked with maintaining the collective security of all UA signatories and their recognized interstellar colonies within the frontiers of the Network. Operating in tandem with local forces, the USCM was often the first line of defense and the vanguard of any counterattack. 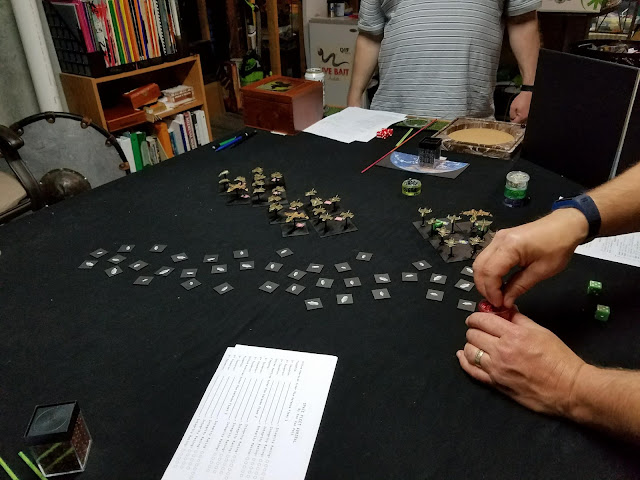 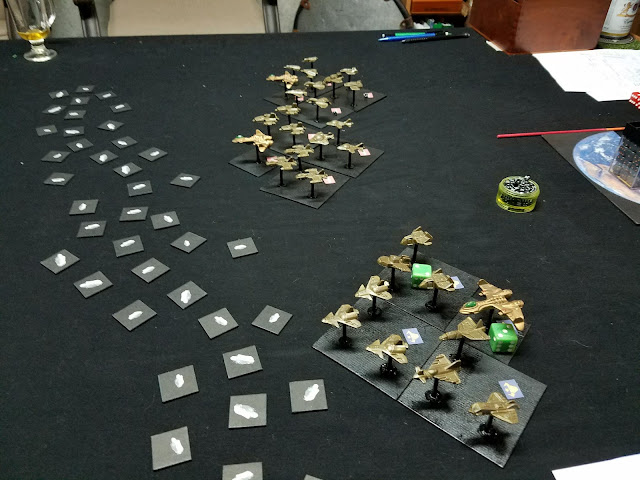 United Americas
The United Americas was a country formed by the merging of North, Central and South America into one socioeconomic block. Created in 2104, the United Americas largely emerged as a response to the formation and growth of the Three World Empire, which was at the time pioneering space exploration and extra-planetary colonization. Aside from its terrestrial presence, the UA also oversaw several extra-planetary colonies, including that of Olympia on Luna. 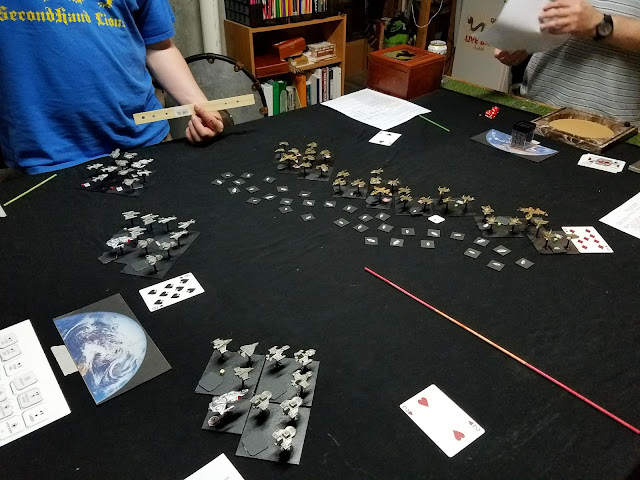 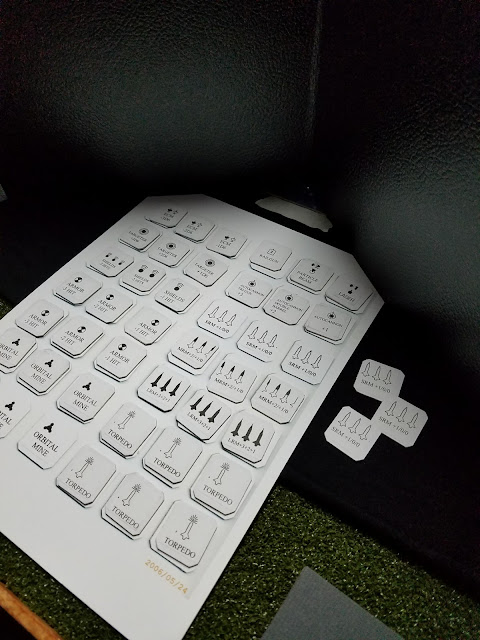 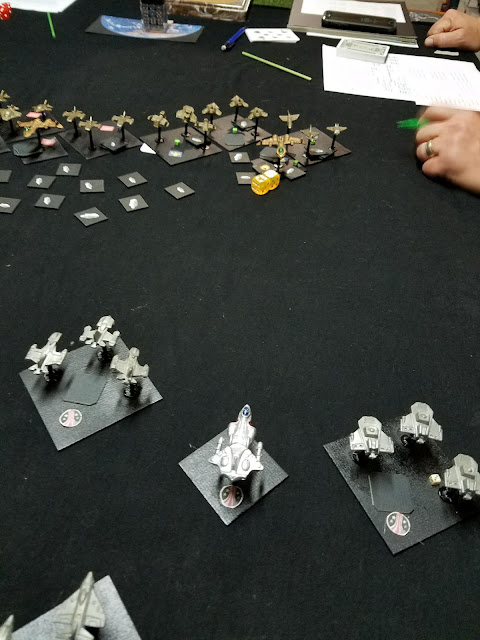 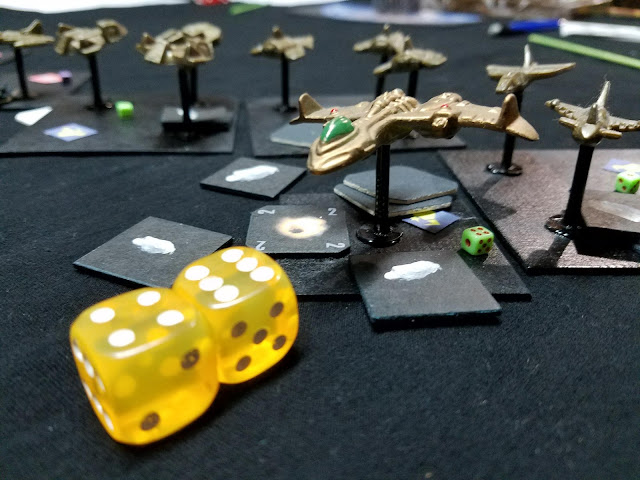 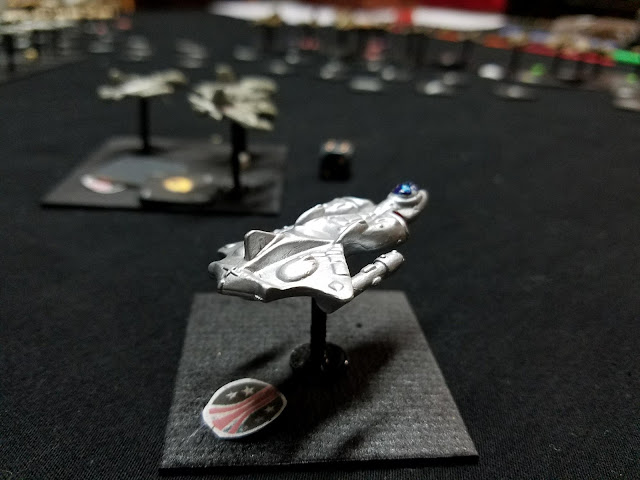 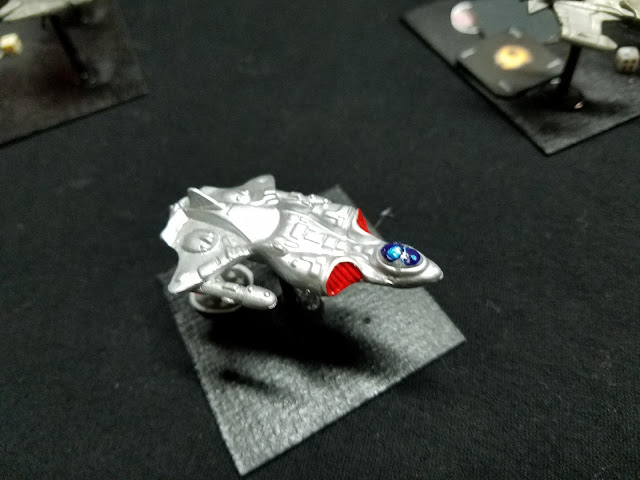 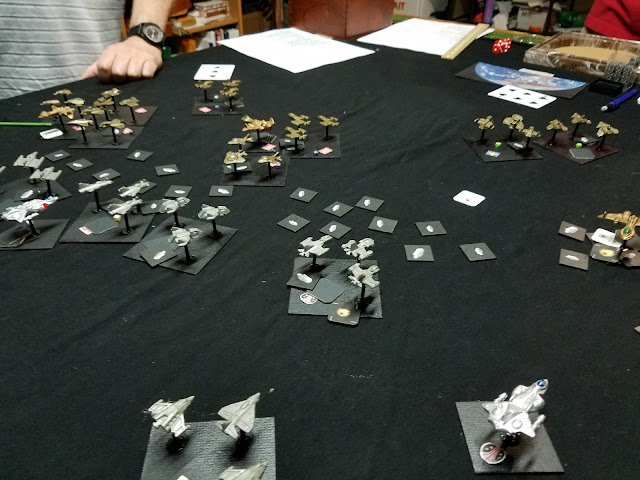 All background text is credited to the above website.  A long time ago I researched the background material in the world of the Alien, Aliens, movie franchise and came up with a notion of what a battle in that universe would look like and what the captain of the Nostromo would have done in his previous military career.  I don't remember the websites I used and I am pretty sure this isn't the one I used but a google search for some of the common mythos vocabulary produced much of the same material I do recall.

Seeing this game again after 12 years was delightful.  What I was presenting when I designed and built the collection of ships for this game, was a combination of a sky full of space ships, and the ability to build your own fleet that had a choice of weaponry.  I used to play a Steve Jackson game called WARPWAR and that had a lot to do with the design aspect of this game.  I kind of remember the Honor Harrington series also and the fact that there were a lot of ships in the big battles.   I also didn't want to get down to marking hull damage and individual turret shooting it was supposed to be on a much grander scale.  Each of the bases in the above photos is a fleet of starship cruisers, battleships, tugs, transports etc.  A set of three of these bases is coalesced into a command structure and is given a capital ship or "flag" ship for a player to control.

A unique aspect of this game was a technology tree or matrix of weaponry that you could build into your fleet to personalize the force and also for a fun event against an opponent as you were not supposed to know what the other player had decided to build onto their ships. (The black 1" chits are the weapon arrays.)

It was a resource acquisition game in one scenario but that was not all it could do.  This game's format had a lot of "legs" in that you could replay planetary bombardment games.  You could deep space deploy mechs.  You could have orbital mines defending the approach vectors to your planet.  I used the old push-pull campaign map for the Torin Prime War scenarios but there was a lot that this beautifully written game was capable of.

So I got to play it again after a long absence of  years of it just sitting on my shelf gathering dust.  My friend Ted hosted a game night in which  this game was tabled for our entertainment.  I had given the entire game to Ted.  All the ships, control sheets, background fluff, design notebook the whole shebang.  Ted had always commented that he liked the game and always mentioned that we should play it again as it was good.  Well like many things in this hobby there are too many games and not enough time so now this game will live on in Ted's collection.  Regrets? No.  It served it's purpose for me and I could make another copy in an afternoon.