Flashing Steel in the Mean Streets of Lion's Port

The Mean Streets of Lion's Port

The scene opens with the clanging of the ships bell emergency signal.  All hands on deck!  The alarm punctuates the attention drawn by a series of musket and pistol shots that rang out from the port and on deck of His Majesty's ship the Hotspur. 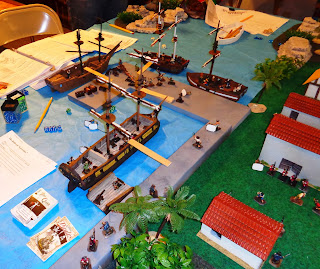 Call out the militia there's mayhem in the streets of Lion's Port.  The murder of innocent civilians is attended to by the militia as a foot chase occurs in the area around Admiralty Square.
It's 8:00 AM.
Someone is attacking the Hotspur.
The rising sun begins to enlighten the harbor port and the scene of the previous night's adventure.  The Annic Nova is gone (did it sail away or what...) The landing party that arrived on the docks in the predawn were maddened by some mysterious force and began assaulting all that came within arms reach.  The madness has poured onto the decks of the admiralty ship anchored in the bay.  A ninja madman acrobat and a ferocious little imp are slaying all on board the ship.  They must be stopped.  The dwarf killed two more midshipmen as they attempted to evict the madman from the ship.  Then the monster went below decks to wreck havoc on all the furniture and cabinetry on board the vessel.
﻿ 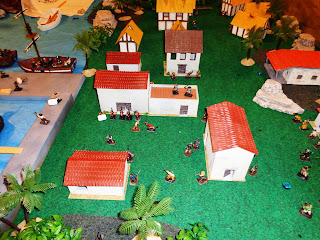 A murderer is loose on the streets of Lion's Port.  He will be hunted down and brought to the Governor's justice.  He made an escape into the neighborhoods behind the Bollocks Mollusk tavern.  There is a rampant fear in the village and nearer the cane fields that the slaves are going to revolt and take over the island backwoods. 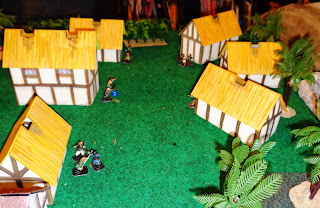 Currently a farmer is missing and his slaves have taken over his residence. It is becoming a small gathering spot for the town's pirate brethren... 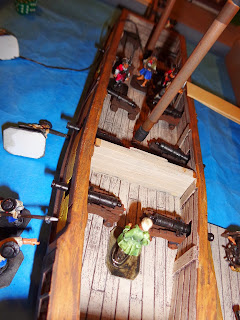 On board the Hotspur the dwarf is trapped in the main cabin. (Notice the stunt double for the absent player character mini.) 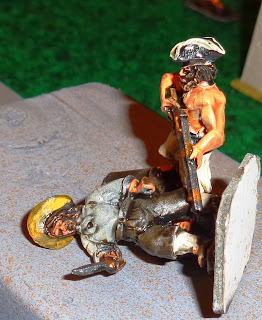 and the ninja has been captured as well. (again, anther stunt double.) He made a valiant attempt to leap from the bow sprit of the ship and rolled three 1's to catch his foot in some rigging rope and dangle from the end of the boom like a bobber on a fishing line.
A great Thursday night of gaming and a fine story line has emerged.  Will the slave revolt turn into a full fledged battle?  Can the imp be contained in the ship or port for that matter?  Will the murderer be found?  And why did all the characters that went out to the Annic Nova come back so blatantly mad and violent?

Tun in next time for more Flashing Steel!