Merry Christmas One and All

Come to find out. My browser had issues with Blogger. I sat down and read the Blogger FAQ. Recent posts have been all wonky. Followers can anticipate better quality in posts as I have updated to Mozilla Firefox. Here are some pixels of my Christmas toys. 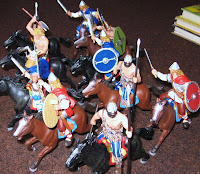 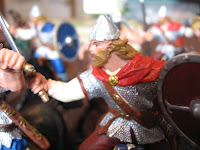 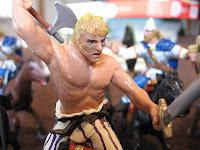 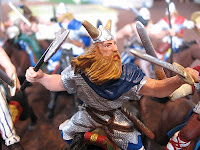 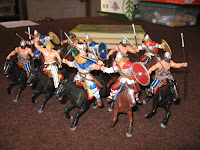 The Joust in Song of Arthur and Merlin

Sir Kenneth spurs his mount to the far end of the clearing. The Black Knight of the Forest Adventurous does likewise. The format for such encounters is three long move sticks apart. At this distance both knights closed their helms and tilted forward in the saddle and urged their mounts on.

The rest of the party watches from mid-field, the anticipated point of contact.

The horses clambor forward at the gallop.

Contact is made and Sir Kenneth finds purchase for his lance tip!!

The Black Knight is unhorsed in honorable combat.

Adventures in the Perilous Forest

The noble adventure continues with a third try at crossing the fjord. The party of knights knows full well that the river is guarded by a knight which requires a test of arms on foot to prove worthy of passing the fjord he defends. A herald is sent ahead to ascertain if this noble knight defender is still active and in the area. Sir Cadric becomes impetuous and spurs his horse to action in a headlong charge for the river crossing. His activation brings him into contact with the Fjord Knight! In a moment it is over. A crash of the lance tip of Sir Cadric and the Fjord Knight with his fish adorned helmet is defeated and sent headlong into the river. And then enchantment occurs. The fjord knight vanishes and a large carp the size and shape of the helm crest splashes into the water. It shimmers in the afternoon light and then swims away regally upstream
.

The death and escape of the Fjord Knight (enchanted).

As he vanished a large regal carp was seen to swim away upstream.

Our party crosses the fjord. A little embarrassed at the number of attempts this took and a little chagrined at the reckless impetuosity of sir Cadric. -1 chivalry.

Sir Kenneth hails a black knight. The knight challenges us to a joust. We consult the Song of Arthur and Merlin manual and set about demonstrating martial courtesy.

"None Shall Pass" Song of Arthur and Merlin 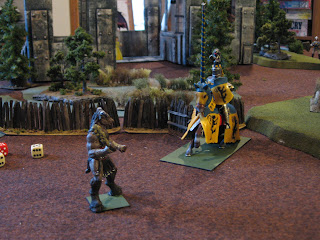 Played a delightful game of Song of Blades and Heroes over the weekend. I am beginning to collect a substantial Papo and Schleich medieval collection and I am using Song of Blades to game these large scale miniatures. I have the Song of Arthur and Merlin supplement and have created some warbands in an effort to resurrect my old Pendragon characters. My current warband included two knights two archers and three men at arms. I set up the wargames table in vignette area encounters. I practiced a minotaur pit combat to warm up the table and then I set up a Chapel Perilous and an Adventurous Forest for my warband to traipse around and fight out encounters. I had a small rivulet running through the woods with a fjord and of course a knight errant defending the fjord against all who should try and pass without a test of arms. This knight proved so dedicated to his task that he defeated both knights in combat not once but on two occasions. In the second fight I had to even resort to gang rushing him with men at arms and shooting him with arrows to try and give an edge to my knights who actually had honorably dismounted and fought the combatant on foot. The reaction of our foe was to behead gruesomely one of my men at arms, shrug off all arrows that assailed his armor and tump both my knights into the water defeated!!
Pictures will be added if the blogger beast will cooperate. 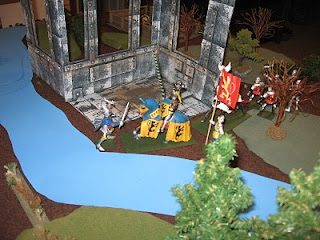 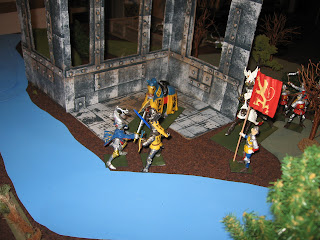 Sir Kenneth and party meet the knight defender of the fjord.  He proclaims that no one passes this way without a test of arms.  the fight will be to "first blood"! Not lethal but a test of a knights worthiness nonetheless. Sir Kenneth dismounts for a chivalrous fight at the river's edge. 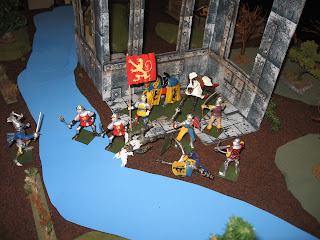 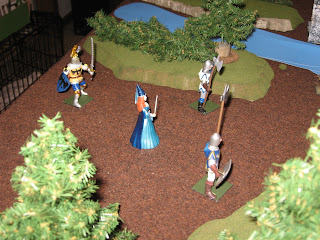 Sir Kenneth and Sir Cadric are defeated and the men at arms come in to hold off the mysterious Knight of the Fjord!!
An enchantress of the Forest Adventurous.  I will have to pass the Fjord encounter before I meet the likes of the magic perils of the forest.
Posted by Gr33nw00d11 at 9:03 AM 3 comments: