Aliens on Hadley's Hope The Attack on LV426

The Colonial Marine Platoon lands on Acheron near the planetary atmospheric plant. 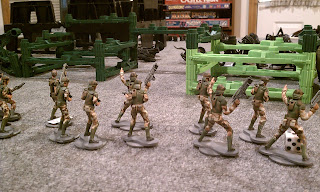 Alien presence is immediately anticipated.  Planetary scans have detected a large hive complex well established inside the confines of the facility. 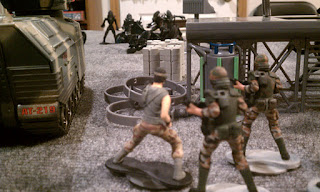 The platton APC rolls through the front gate from the landing pad flanked on either side by squad 2 and 3. HUD contact is maintained with the commander on a sustain roll. Alien xenomorphs are contacted visually and on bio scans of the facility. 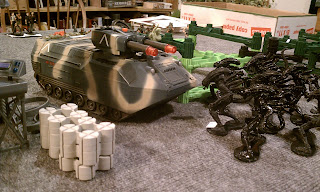 As the entrance is breached by the APC. The hive comes alive. Wave attacks of warrior class xenos pour from the facility. 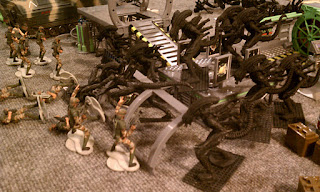 Squad two is contacted first.  Pulse rifles and smart guns mow down the fast attackers. Shoot, Scuffle and Save rolls are used in the GASLIGHT moderated combat. 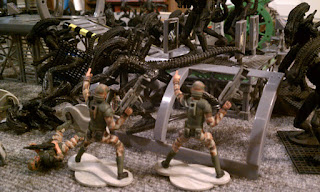 The second squad is overrun and takes heavy casualties.  Amazingly they make their moral roll with only 4 members left.  They fire on but to little effect. 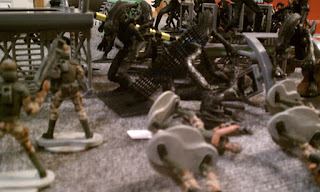 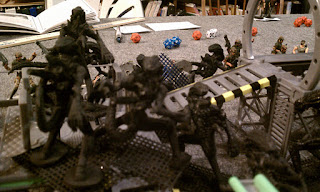 The view from behind the alien left flank.  They are vaulting over the machinery in the open yard before the factory. 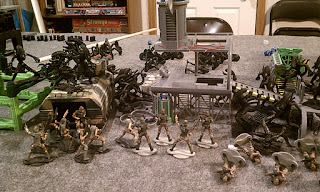 Scenario is currently at this stage.  APC overrun and taking acid hits.  2nd squad ineffective.  Let's pull back and nuke this place from orbit.

The wargame club gathered around the Lion's Den table at Ken's for a try at the new November birthday present, "Star Trek Fleet Captains." Many people have reveiwed this game and the production quality is reknown for the obstacles and difficulty of actually acquiring a playable copy. I was in that group that purchased a model kit instead of a game. After 3 attempts by customer service I was able to put my copy in play. I bought it in November. It's January. 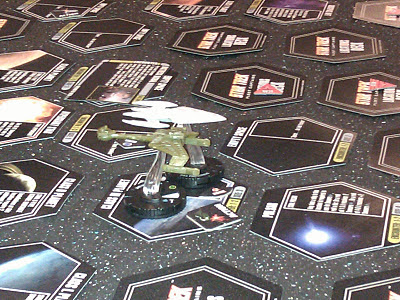 We played a four player version with all 50 space location hexes in play. I got the motion picture soundtrack and played it on the cd player. We had a video from youtube as a game precursor. I emailed this link to the players pre game night. I also downloaded some cheat sheets from the board game geek web site. 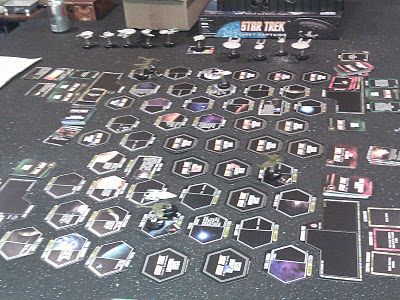 The game is fun and has a variety of victory paths. This game went to the might of Klingon combat force. We scored our 12th victory point by causing a catastrophic kill on a Fed science vessel.
Go figure.