Song of Arthur and Merlin

It was the Duke's birthday and the castle was festive in preparation for the event. The household knights had been in training for weeks to put on a grand melee. The twins Cadlew and Connor watched from the parapet as the retainers and house men at arms assembled on the melee field. Gwynfannon and his band was an easy favorite. 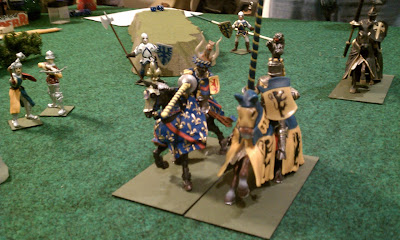 Gwynfannon (right) would prove his mettle this day on the field. Surrounded and being assailed on all sides he would sweep the opponents from the field and cause wiser men to rethink even to cross lances with the castle champion. 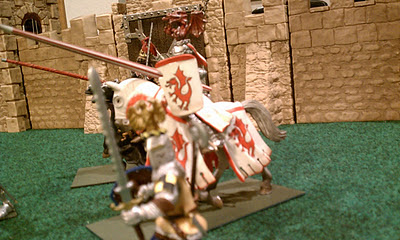 Sir Tyllid surveys the field and tries to send in his lance to his advantage.
The day went well for Tyllid and his warband but the strength and prowess of the castle champion became too much. In fatigue and disgust Tyllid retired from the field to try and fight another day. 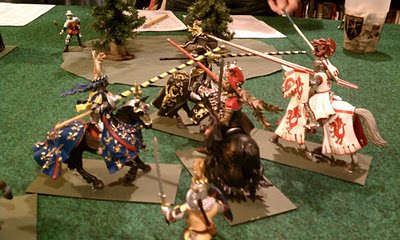 The height of the action. 90mm wargame fun in the Lion's Den using Ganesha Games, Song of Arthur and Merlin.
Posted by Gr33nw00d11 at 7:01 AM 1 comment: