We sneaked in a late Halloween dungeon crawl using the Advanced Heroquest board game by
Games Workshop. The adventuring party below went looking for a kidnapped victim.  Deep beneath a cult cultural center was a labyrinth of halls filled with evil thugs and scouts bent on mischief and mayhem.  Our party of first level adventurers learned the rules as we went. 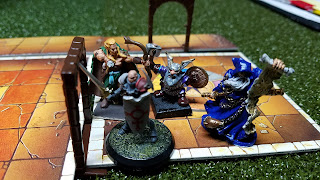 At the beginning of the evening we moved and mapped. 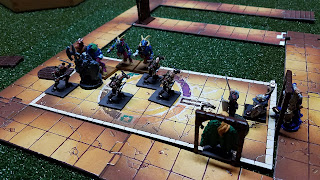 Late in the game we encountered a heavy room full of foul beastmen and Chaos thugs. 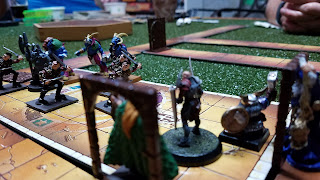 Pretty nice set of rules.  Seems like a fulfilling bit of fantasy and dungeon delving would be accomplished with a lot of game play in a campaign. 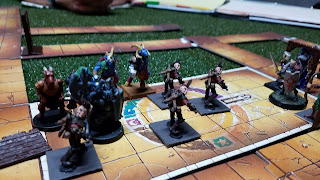 We cleared this room and the evening came to an end.  Maybe see this game next year.