Aliens on Acheron The Assault on Hadley's Hope

The United Americas Allied Command has selected the brave and stalwart marines of the Secondhand Lions wargame club to participate in the play-test of an Aliens by GASLIGHT game. 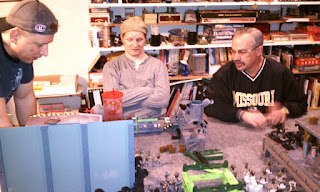 Here we see the deployment and pregame strategy develop in the minds of the attackers.

The GM gets to play the bugs. 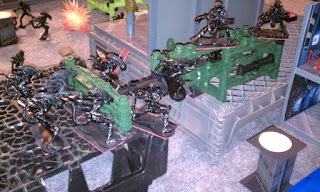 The scenario was the second instalment of the Aliens on Hadley's Hope mini campaign played using the GASLIGHT rules mechanics and the Tree House Kids 54mm Aliens collectibles in my sci fi collection.  The players are presented with a campaign map that is divided into 3 x 3 sectors.  Each sector is a wargame table and the marines must be successful in holding the terrain objective in order to move from one table to the next.  As the marines move closer to the queen's chamber the resistance of the xenomorphs increases.  The marines in scenario one entered the game map from the lower left hand sector labelled 001. Following the success of brushing aside three pods of 13 aliens each, the marines used phalanx fire from the squad flamer units to push into sector 004.  This instalment of the Penny Whistle has images from our second game.﻿

This image shows the APC with the command squad inside flanked by the marines of squad 2 commanded by Sgt. Carr. 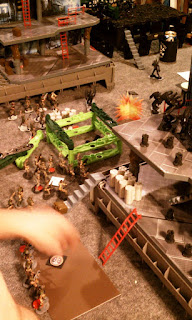 The image to the right is an aerial view of  sector 004.   From the foreground to the background we see squads 3, 2, and 1 sequentially.
The APC pushed forward agressively.  It got swarmed by one pod of aliens.  The aliens began assaulting the hatches and entry points on the machine.  Some damage was encountered but the command squad remained safely inside. 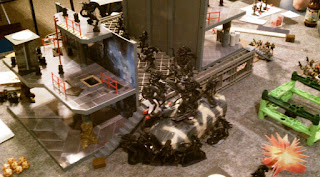 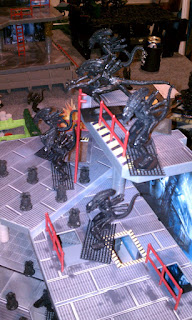 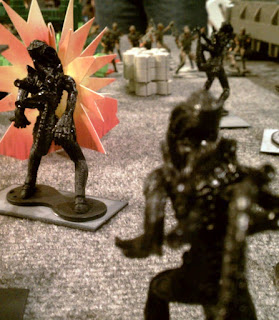